In 2017 Sensory Objects were commissioned to make a box of sensory objects, workshop plans and log book to inspire and discover about art and biomedical science and to gain an Arts Award for Orleans House Gallery

The pictures below shows the ‘From the Outside In’ box the box has images of different parts of the body in cut out blackboard stickers. 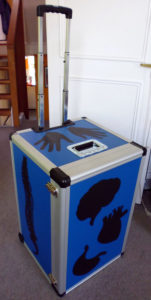 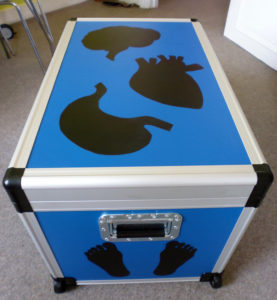 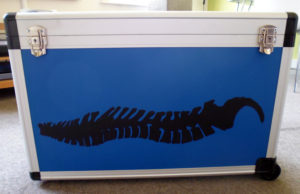 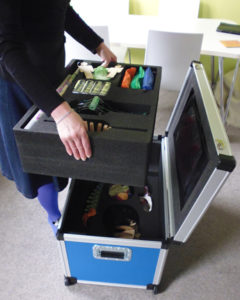 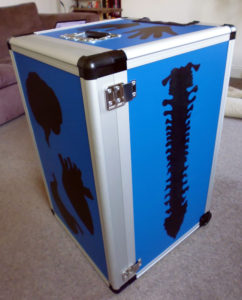 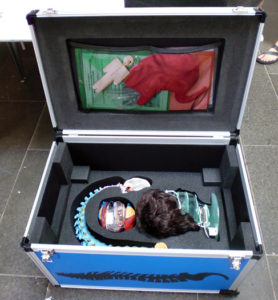 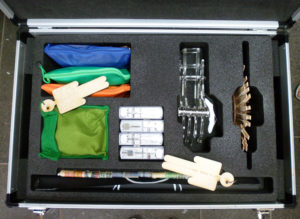 The artworks were developed in response to an interdisciplinary project called ‘From the Outside In’. Through hands on creative activities members of the Octagon Club a weekly club for young people with additional needs aged 11 to 17 and Transitions Art Group young people and adults with disabilities and additional needs aged 18+  worked with artists Morgan Sinton-Hewitt, Anna Dumitriu, Elizabeth Murton and Heather Barnett, Mellissa Fisher, Betsy Lewis-Holmes and science communicator Dr Sarah Bearchell on a project funded by the Wellcome Trust.

Sensory Objects commission was to translate this work into a box of artworks that introduce art and science to children as part of their Key Stage 2 skills at school and to enable them to achieve an Arts Award. In the development/testing stage the artworks have been used in schools workshops including Meadlands School and so far 46 ArtsAwards have been awarded. The box will be launched by Orleans House Gallery in August/ September 2017.

Sensory Objects created a Arts Award log book and a set of workshop plans for facilitators. 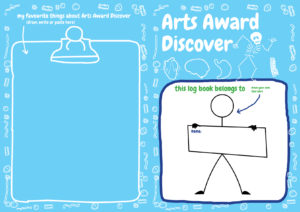 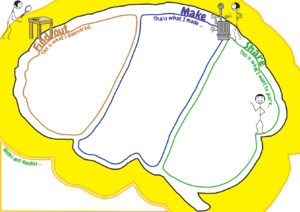 Some of the objects such as the perspex head uses a sound sensor.

There is also a heart that pulses to be used in a workshop with 4 metronomes that can be altered to match the children’s heart beats.

Other works in the box include a felt stomach, put your hand inside the stomach and you can feel the Shibori felted interior made by Octagon and Transitions Group. 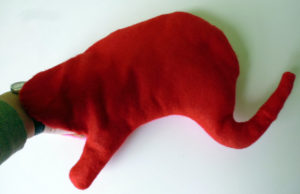 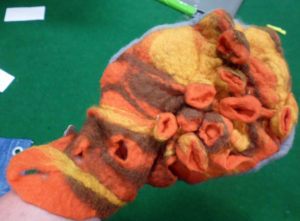 Taking inspiration from Kingston-based photographer Eadweard Muybridge the Octagon and Transitions groups looked at making movements, animation and drawings. The group used double-headed stethoscopes to listen to each other’s heartbeats and drew the sounds they could hear. 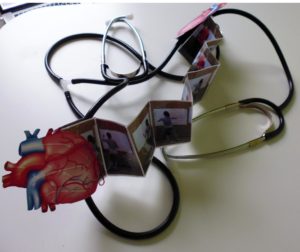 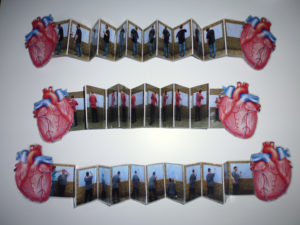 The box contains a rolled chalk board with the outline of a person that children can draw on organs with chalk, and a plaster cast of vegetable/brain made by members of the Octagon and Transitions group. The picture below also shows a drawing from an ArtsAward Log Book inspired by making brain casts from vegetables. 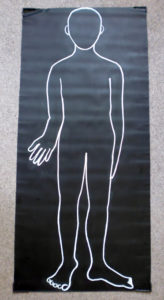 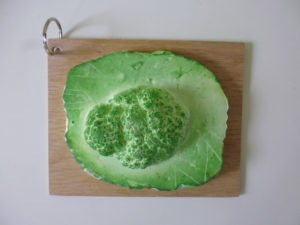 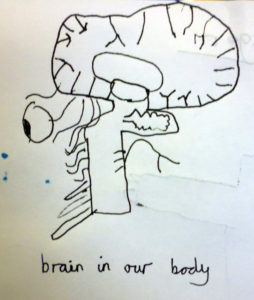 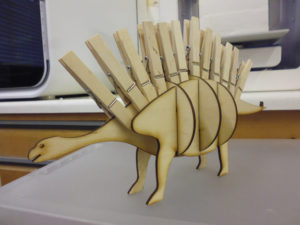 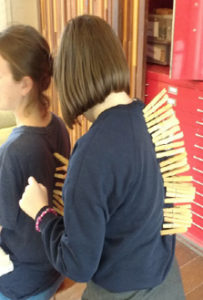 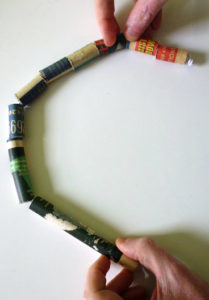 The box contains a perspex hand inspired by the body as a machine, the picture below shows workshop to create a hand from straws, string and a plastic glove. 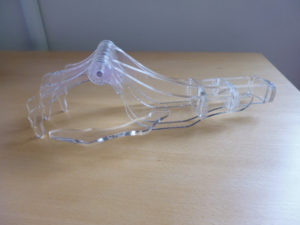 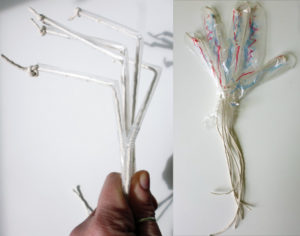 The images below show sheets that are in the box that introduces all the ‘From the Outside In’ artists. 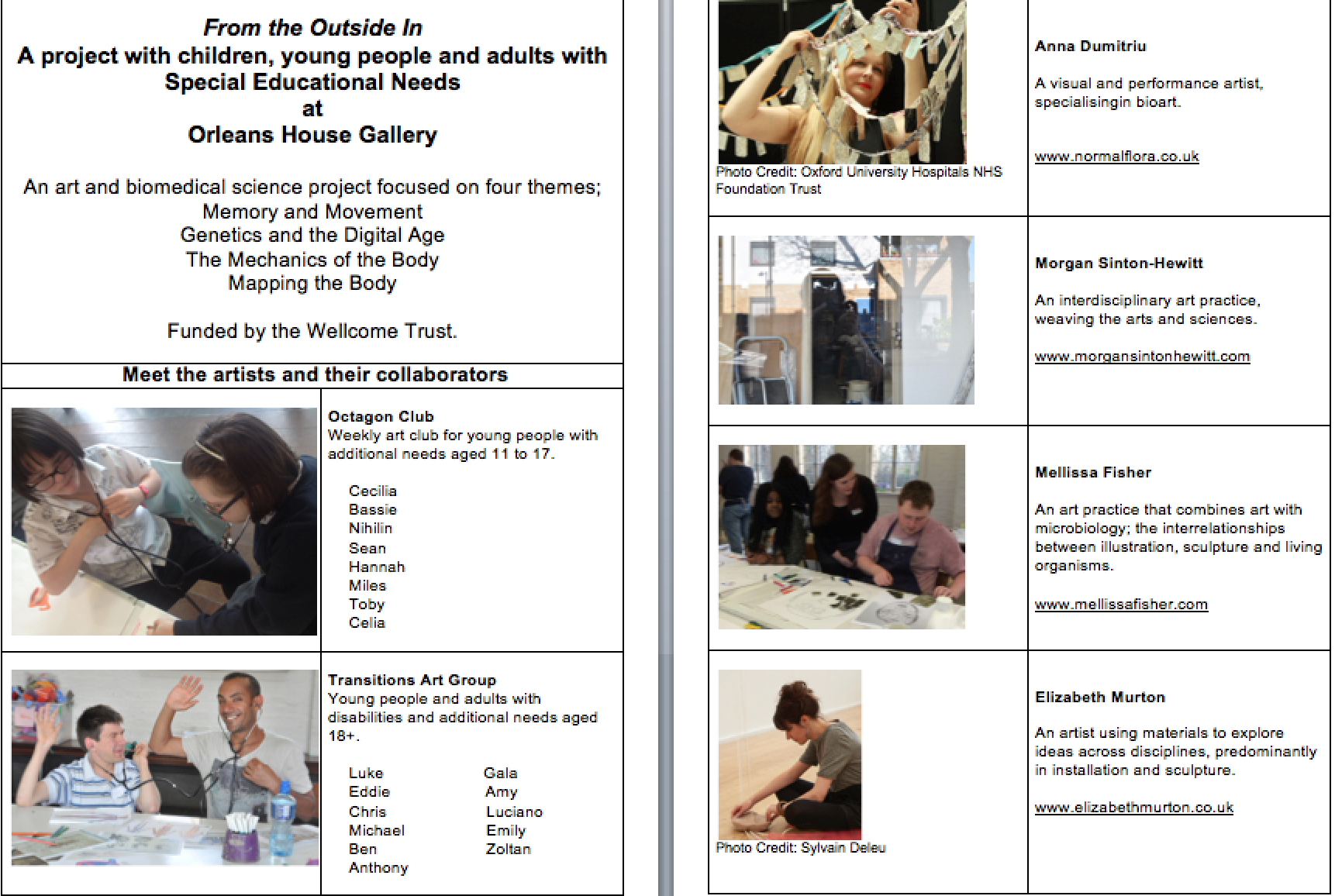 Introduction to From the Outside In page one and two 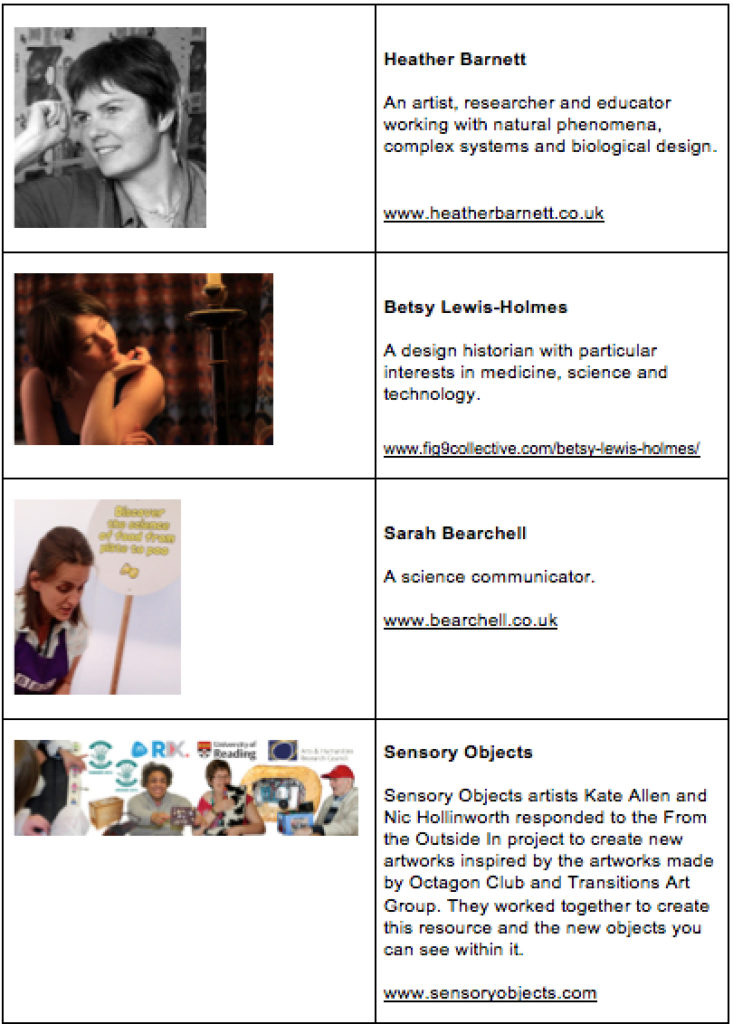 Introduction to From the Outside In page three

The images below show the four projects that the Octagon Club and Transitions Art Group worked with the artists. 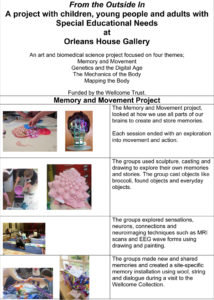 Below Genetics and the Digital Age sheet, 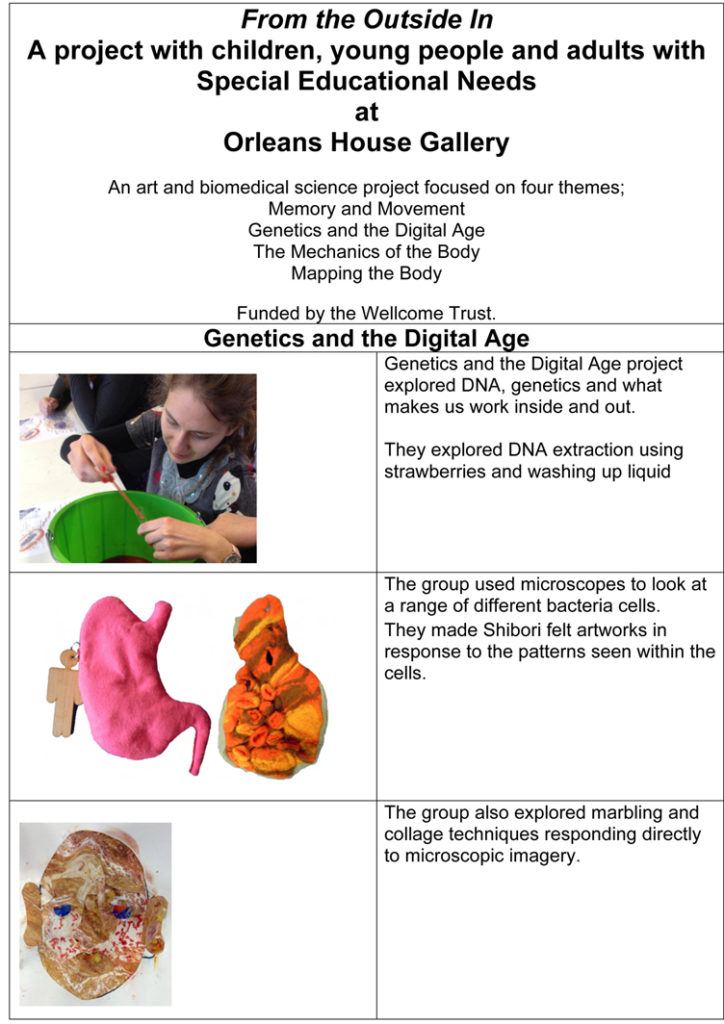 Genetics and the Digital Age

Image below The Mechanics of the Body sheet, 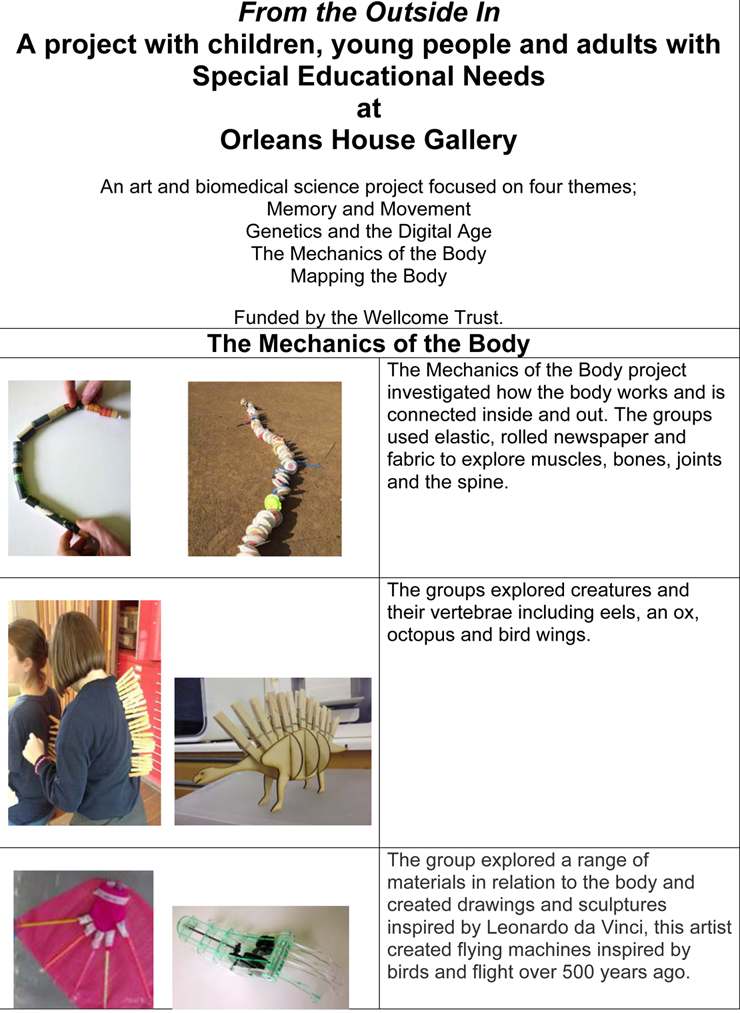 The Mechanics of the Body 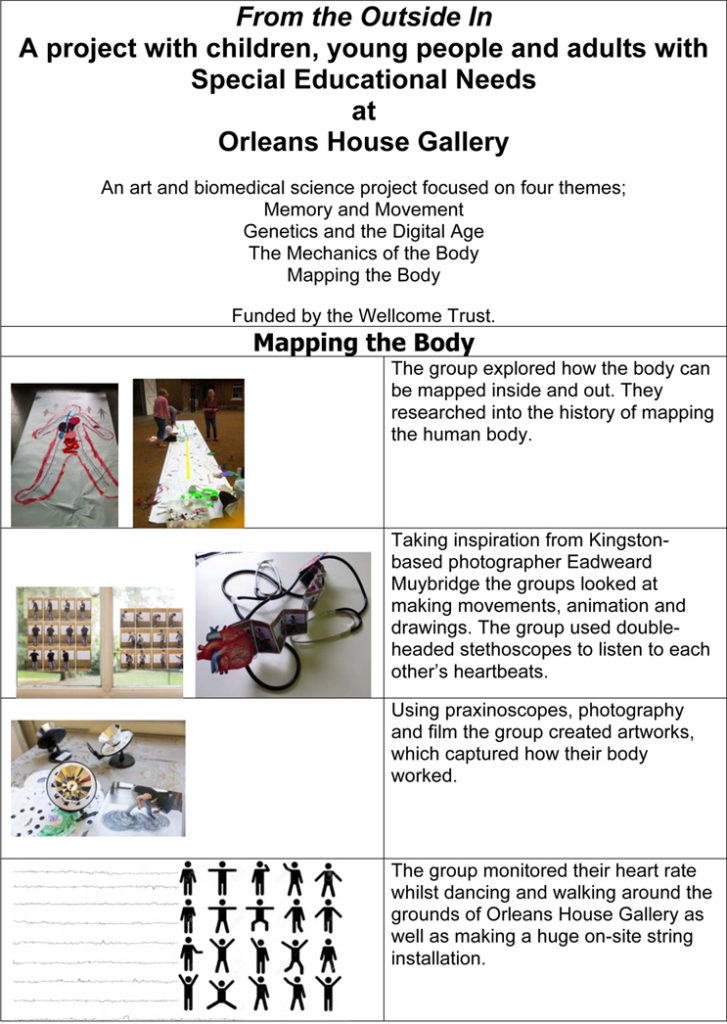