Our fifth workshop at Reading College was spread over two days the morning of Friday 8th and Monday 11th. On the Friday Gosia came and showed our Co-Researchers how to create their individual webpages unlike the group webpage which you can see here the individual webpages are private for each person to reflect on their experiences during the project. On Monday 11th Ajay and John came from the RIX to continue to add to the blogs. In the afternoon we created some collages and drawings. 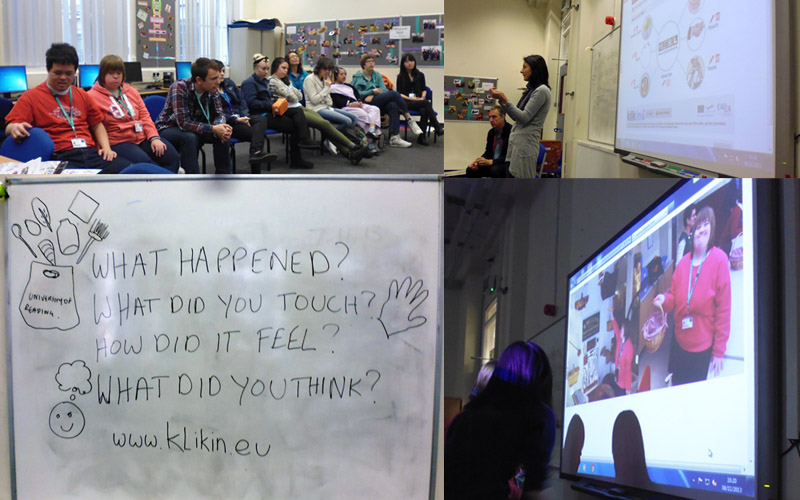 We continued to work on the website on Monday, the picture below shows Rachel drawing what she wants to say for her webpage picture of her holding a parsnip by a display about ploughing. Rachel drew a parsnip, tractor and a ploughed field, she drew an eye to say she had used the sense of sight. The image bottom left shows drawings and text by Rachel describing our lunch at MERL. 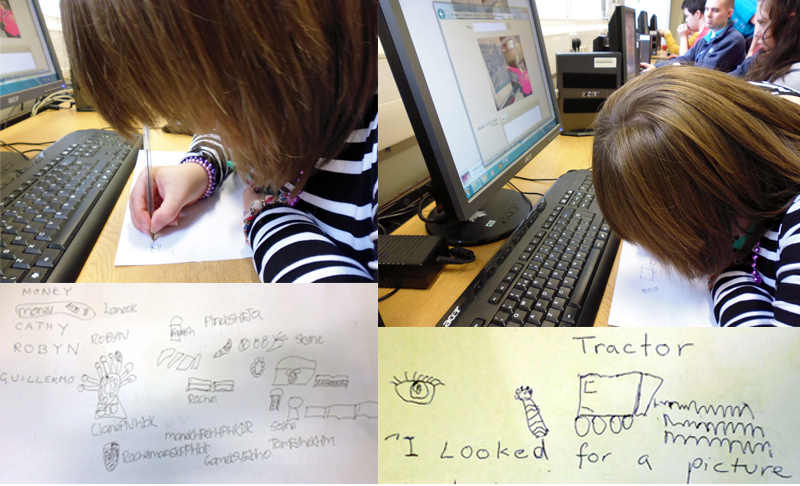 Rachel draws text she wanted under her chosen picture

The picture below shows both Rachel’s, Guillermo and Sian collaging. We asked our Co-Researchers to create collages that would tell a story based on our buckets, boots and baskets. We reminded the group about the nursery rhyme The old woman who lived in a shoe, we asked them what sort of story could be invented could someone live in a boot or a bucket, could sounds come from them, how could the basket, bucket and boot be transformed, give a sensory experience of MERL? 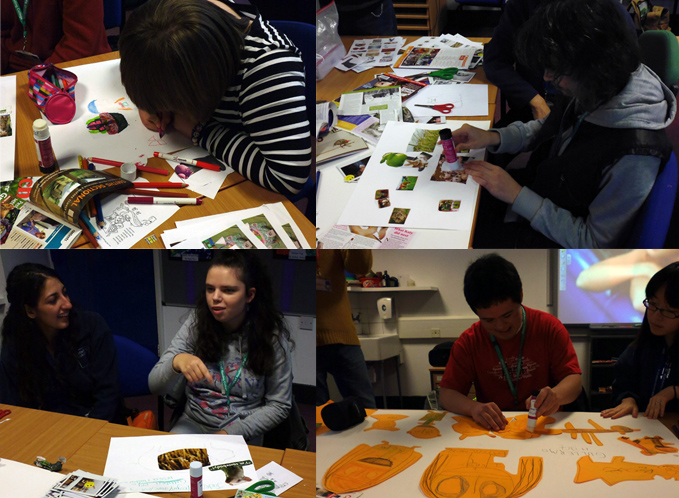 Luke made his collage and made sounds of the animals he made a very good chicken sound “BrkBrk” and started to sing Old MacDonald had a farm, Ajay recorded him singing and making animal sounds. 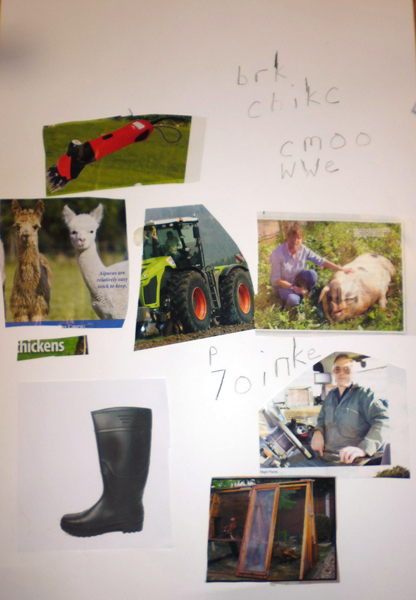 Skye also made some animal sounds but she also started singing the song Naughty Boy – La La La ft. Sam Smith.The rest of the group chose music too and it made us realise how important music was to our group, it has made us consider how we can incorporate music into our workshops more. The picture below shows Guillermo dancing and Rachel singing along to the Spice Girls.

Guillermo and Rachel listen to music

Guillermo drew a story where 3 pigs, Cathy and Guillermo’s family live in a bucket! 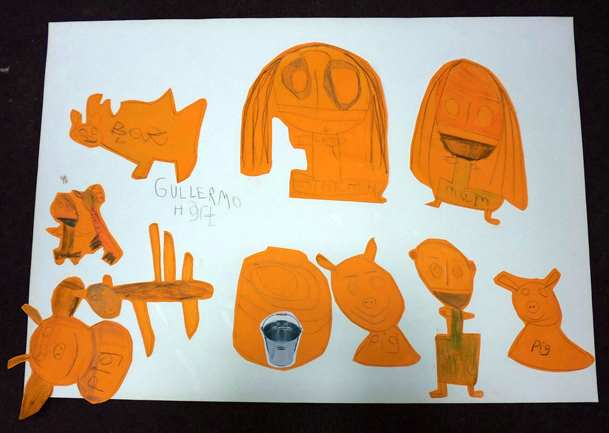 Guillermo’s pic 3 pigs in a bucket and family

Today we met at Reading College to develop Klikin websites with our Co-Researchers exploring our senses and how we used our senses to experience our visit to the Museum of English Rural Life MERL. You can see the Klikin Group Page HERE

The picture below shows drawings by Andy reminding us of our 5 senses: 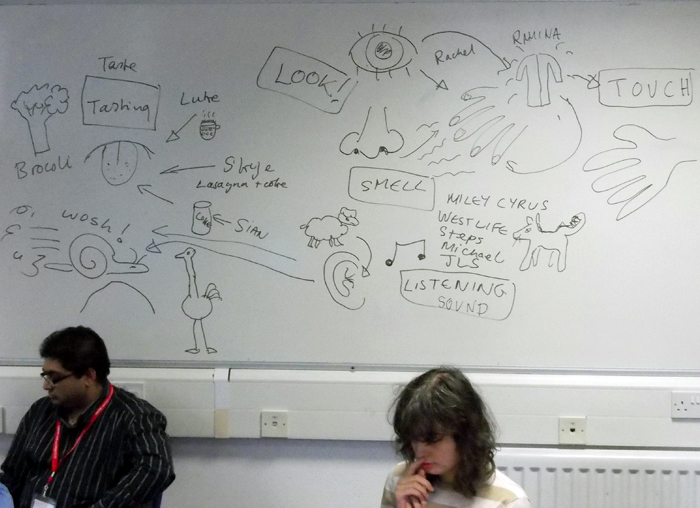 The picture below shows Andy reminding us about our five senses. The group told us about their weekend and Andy pointed out what senses they had used. 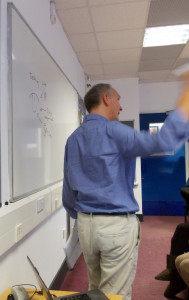 Sian described and demonstrated her weekend activities in this video

Rumena likes the taste of Broccoli, Skye watched a film at the cinema which had an  Ostrich in it, Guillmero loves to listen to the music of JLS, Rachel likes the smell of her pink nail varnish, Sian likes to touch the fur of her black labrador, Luke likes the taste of beer and Rachel listens to Michael Jackson.

The picture below shows the group discussing their senses and the visit to MERL last week. We used the instant pictures that Rumena and Sian took to help us remember the visit. Then Andy, Gosia, Ajay, Shauna and John from The Rix Centre introduced everyone to Klikin Websites 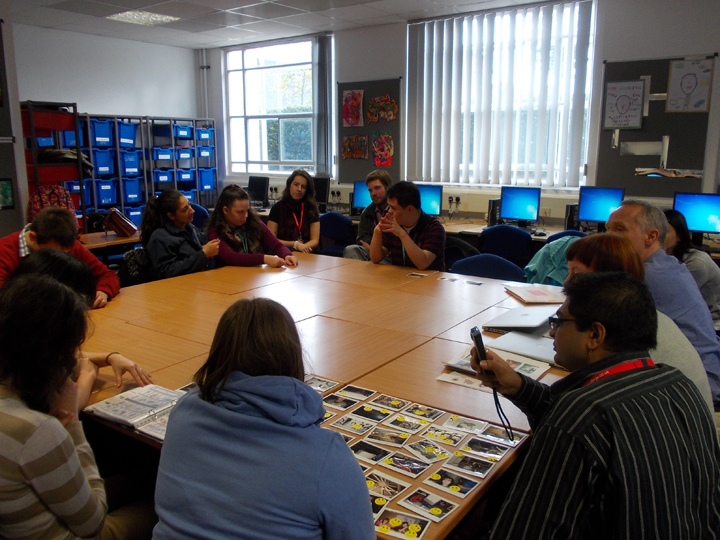 The picture below shows Guillermo at the computer with John helping create our website. 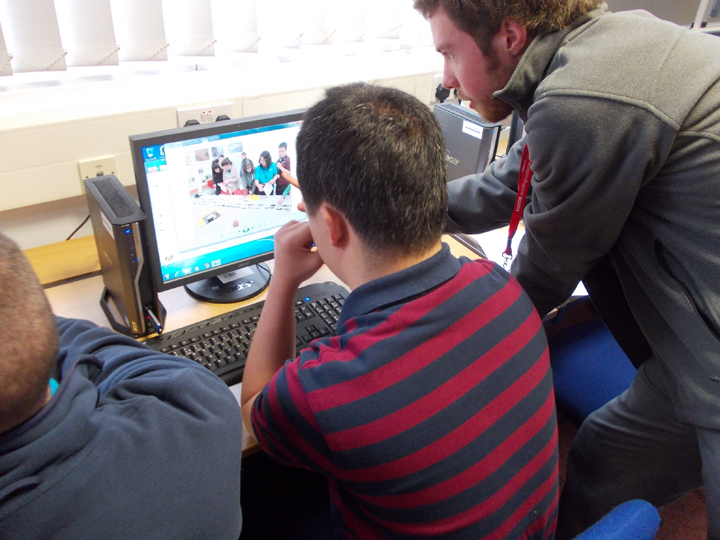 The two pictures below show Sian building the webpage and looking happy when she had uploaded a picture. 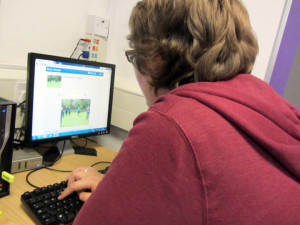 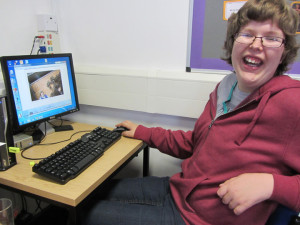 After we uploaded photos, text and sounds on to our webpage we looked at the webpage together. The Wepage has an image link for each of the senses and image link about each Co-Researcher and about the MERL. The picture below shows Rachel pointing to the link she has chosen to discuss. 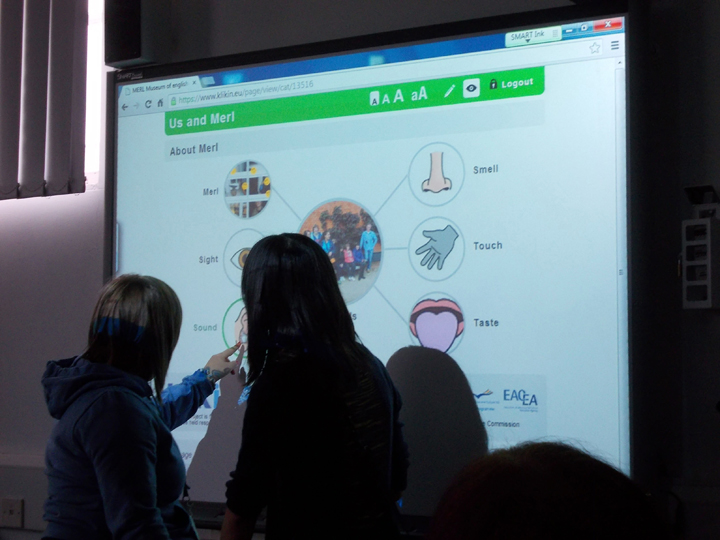 Sian described the sound of metal hitting metal to caption the picture of the Anvil from the MERL collection. 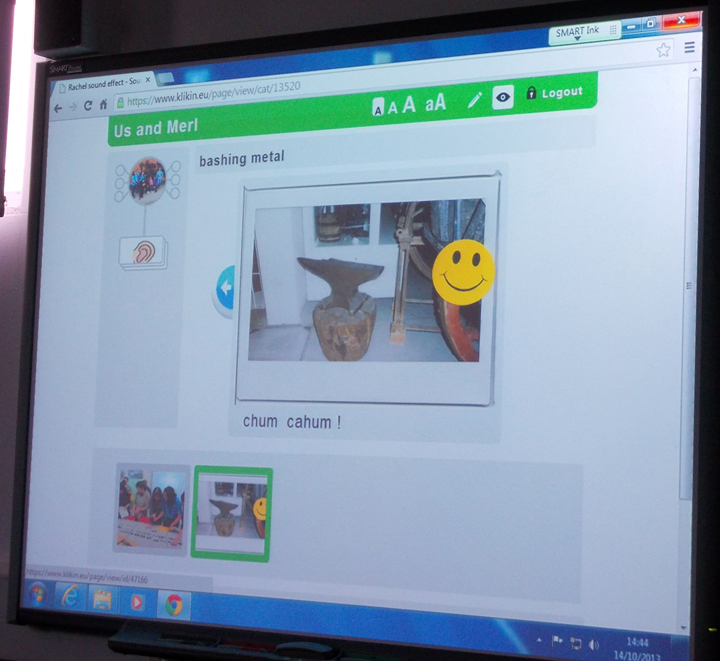 Chaumchaum the sound of the anvil being hit

You can see the Klikin Group Page HERE

This workshop concentrated on collecting, making and recording sounds from Speke Hall. Some of the sounds may go inside the boxes made in the last workshop. You can hear some of the sounds on the box webpage here

There was an initial briefing in the education room at Speke, where a video of Sheila (a Speke Hall volunteer) was played. She described the sounds that you could hear in the house at the present time, and also some of the sounds that you would expect to hear when the house was it was used as a family residence. Following the introduction, the Co Researchers looked at some of the equipment for making sounds (such as the miniature barrel organ) and then either collected sounds from around the hall, or made sounds themselves used materials supplied.

The image below shows Elle making the miniature barrel organ play its sound. After the picture was taken she discovered that holding it on a flat, hard surface (the table) makes it sound much louder. 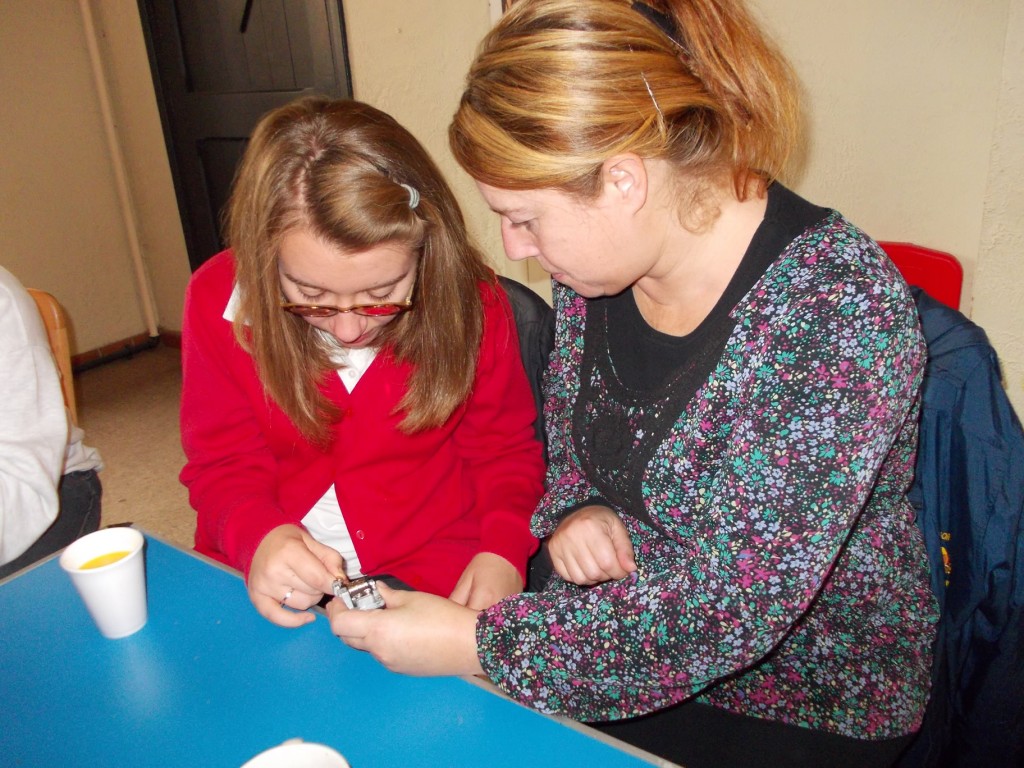 Paul does the same with mini barrel organ: 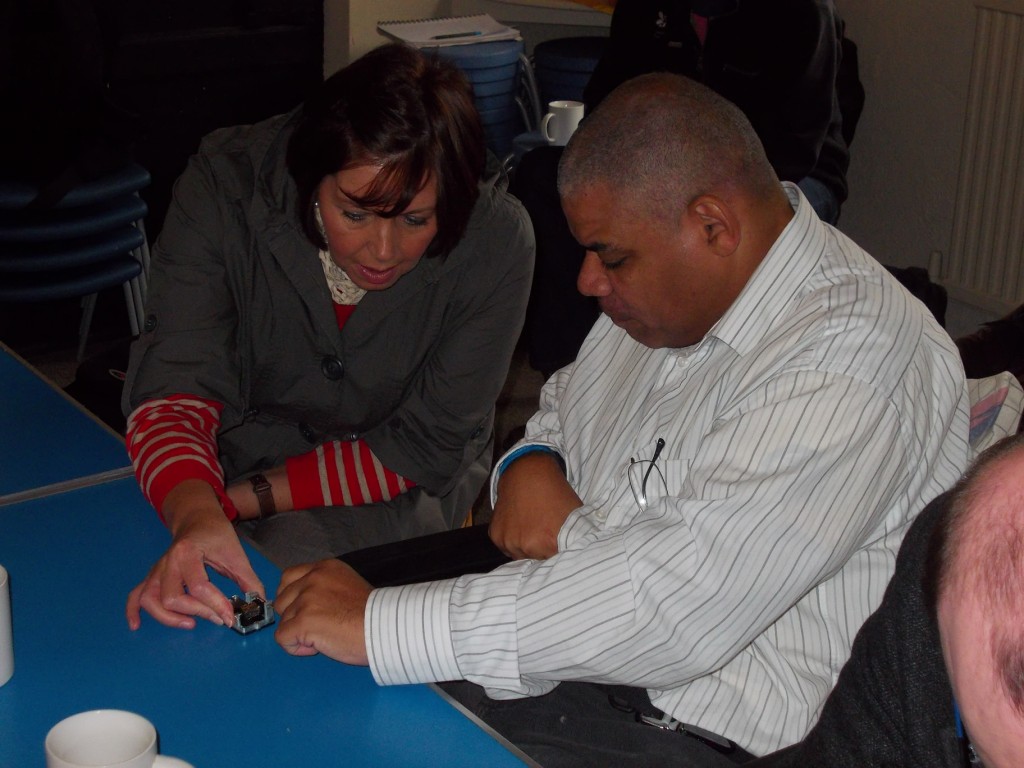 The picture below show Elle making the clip clop sound of horses hooves with coconut shells, Tracy recorded the sound. 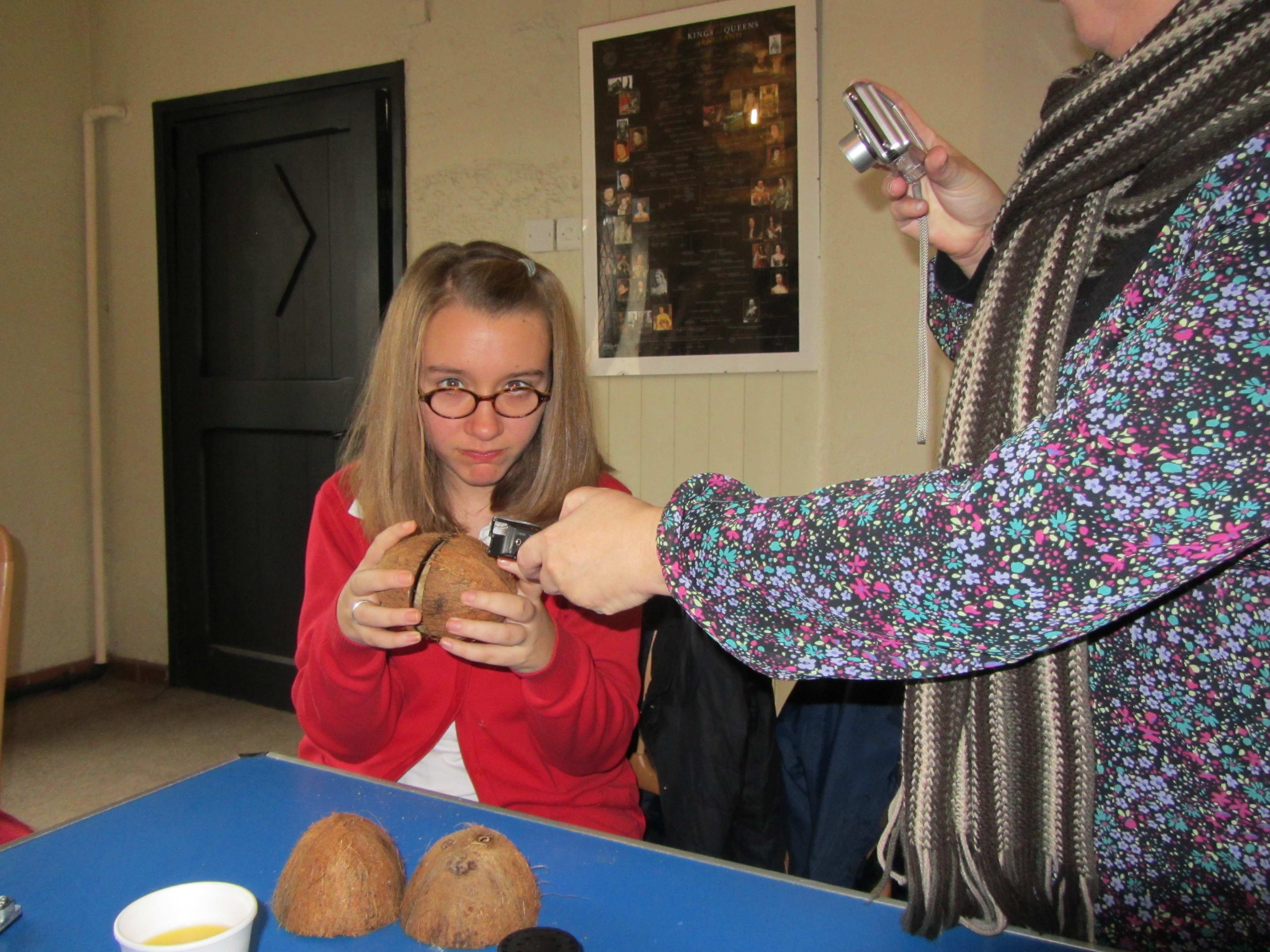 The picture below shows Paul and Angela they found that if they squeezed the cellophane gentley it would sound like a fire crackling. 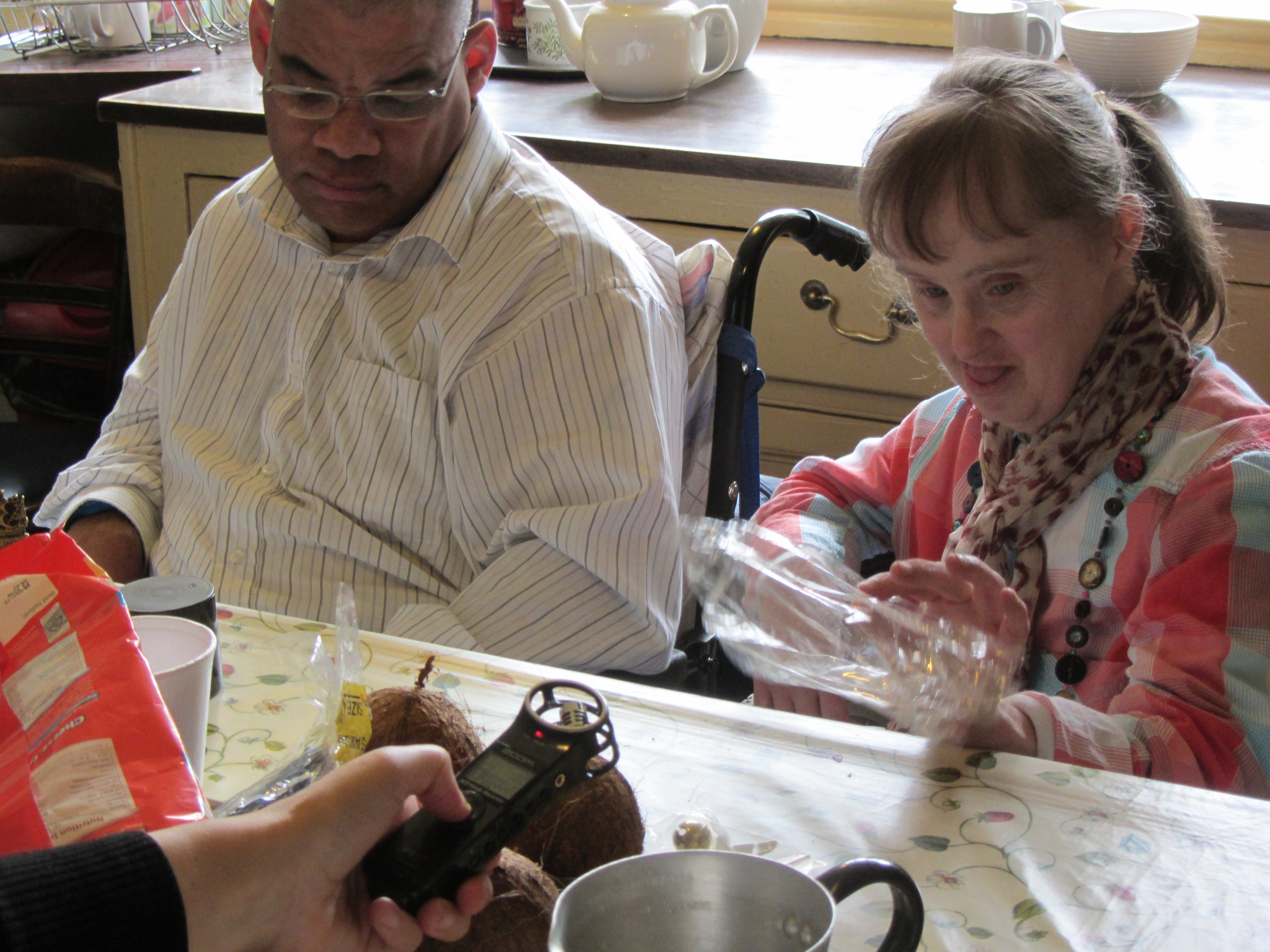 Paul and Angela popped bubble wrap this worked even better than cellophane as the sound of a crackling fire.

The picture below shows Paul with a whisk in a metal jug. The group tried to make a sound scene of the kitchen. 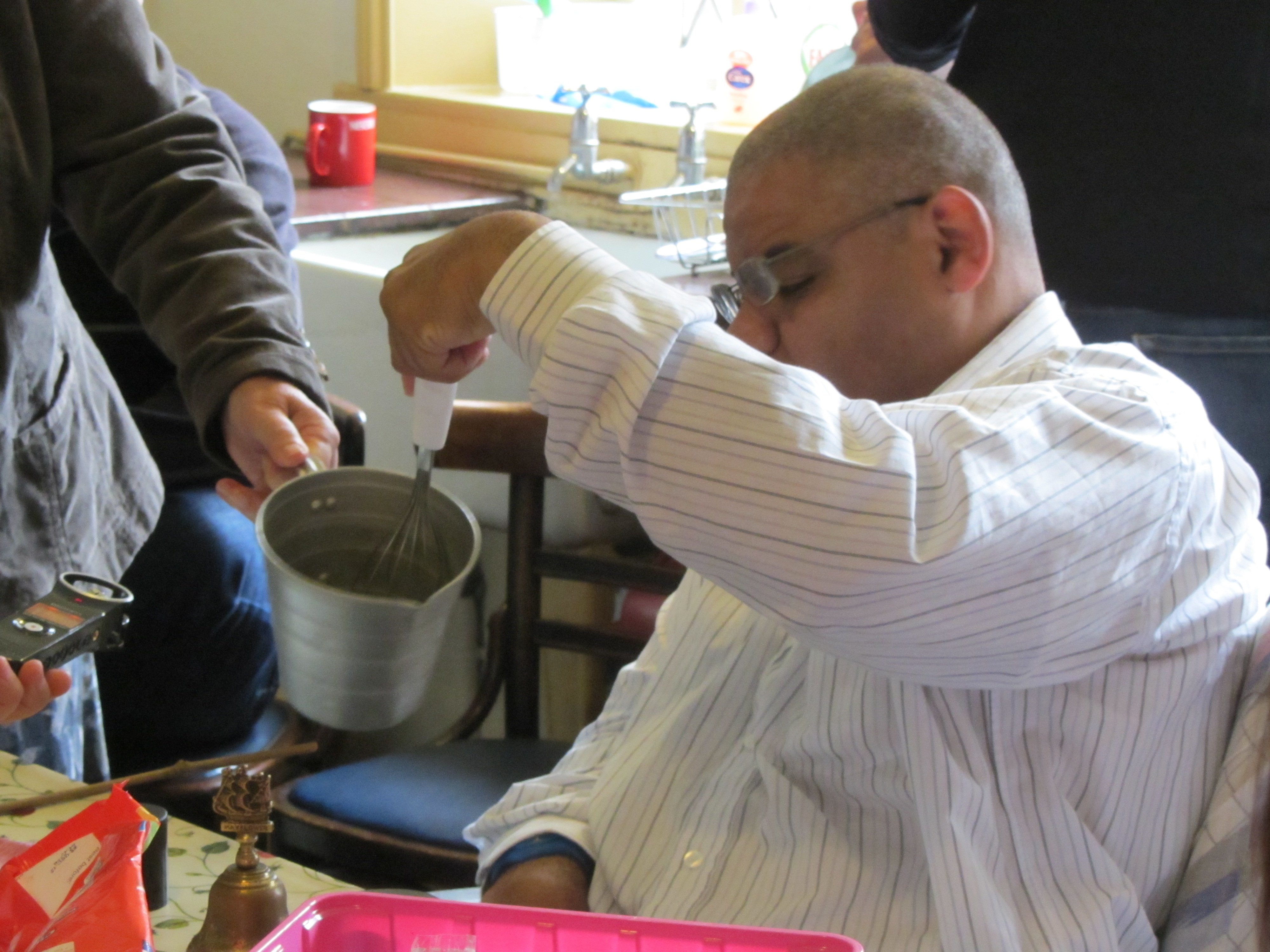 The picture below shows Angela using some wooden paddles that would form butter into a block, by rubbing them past each other they made a rasping sound we did not try them with butter between them. 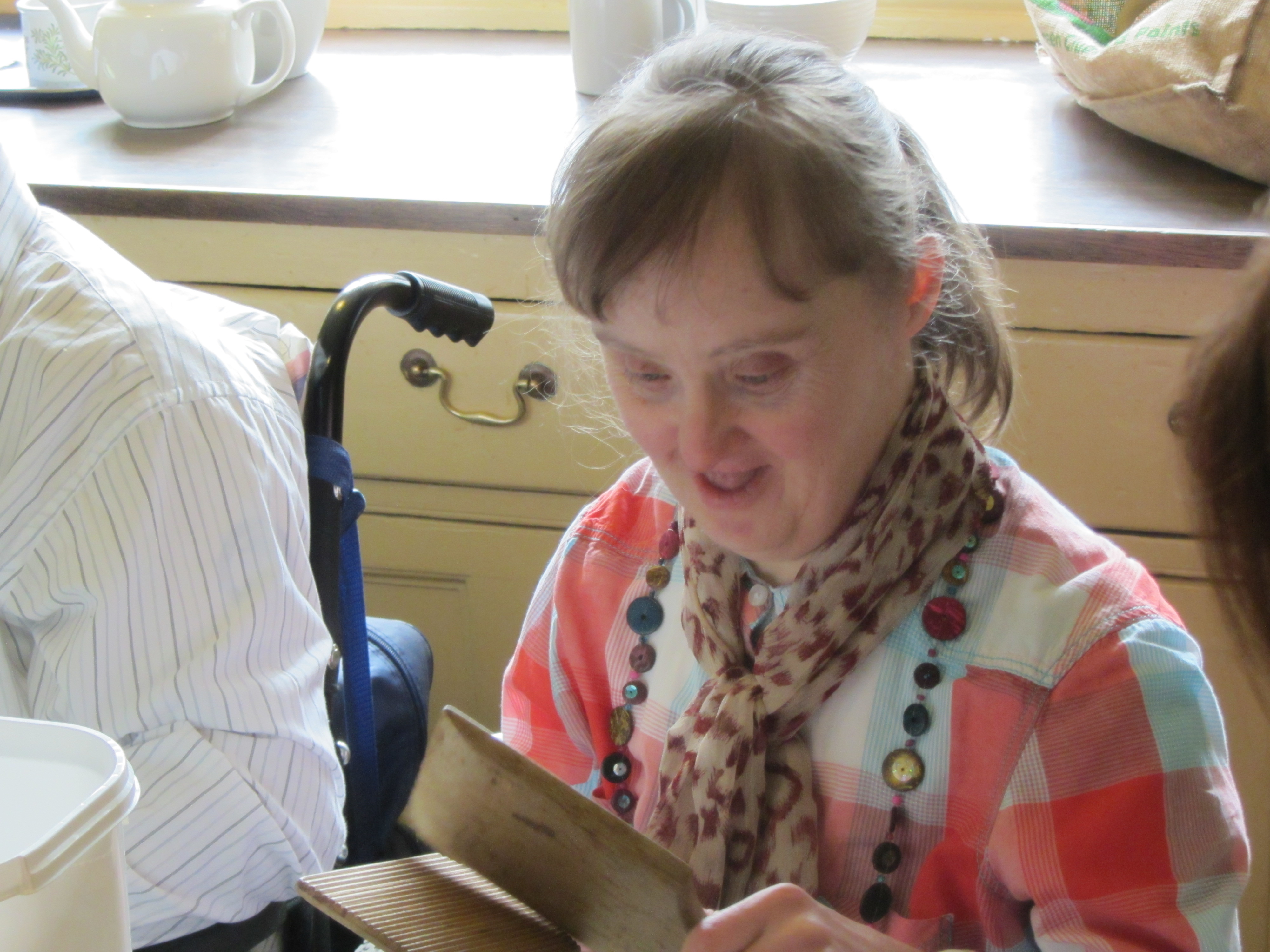 Sounds Collected Around the Hall

Sounds were collected from around the hall, either by directly recording the available sounds (e.g. clocks ticking) or making the sounds happen by some form of interaction. In the two images below, Christopher records the sounds made by billiard balls moving along the baize surface, and when the balls collide. 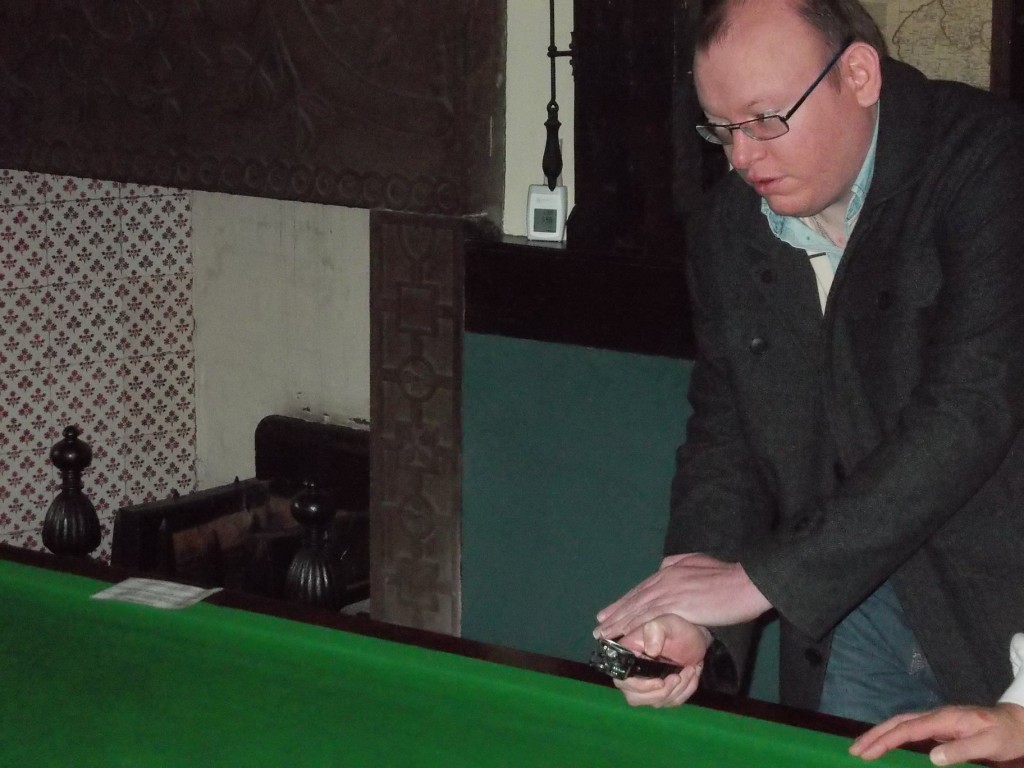 Christopher recording the sound of the billiard balls 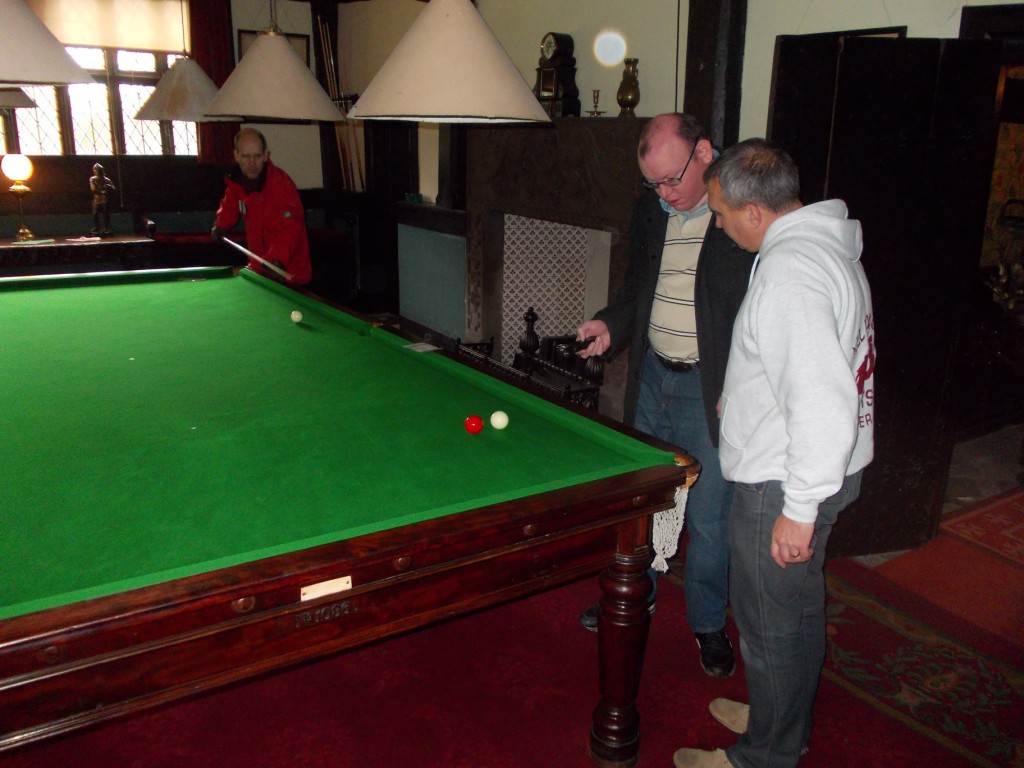 Christopher records the sounds made by the billiard balls

The picture below shows Elle with volunteer costume tour guide Fiona. They collected the sound of the cue and balls knocking together. Sometimes it was difficult to know whether Elle wanted to hold the sound recorder or take part in the activity that made the sound. 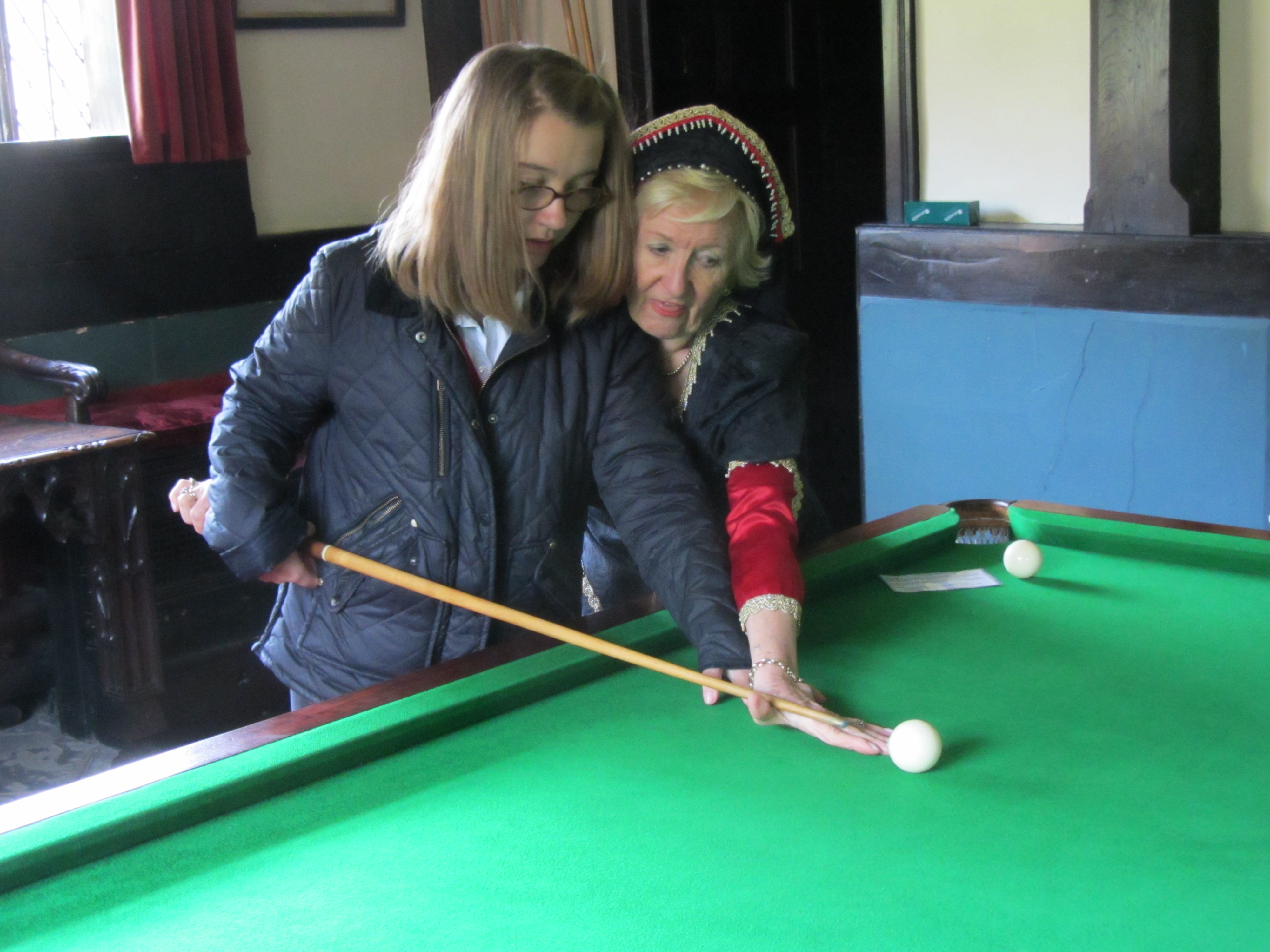 Elle and Fiona billiards sound of cue on ball

The sound made by the ‘secret lock’ and the creaking of the cupboard door in one of the bedrooms was captured by Elle: 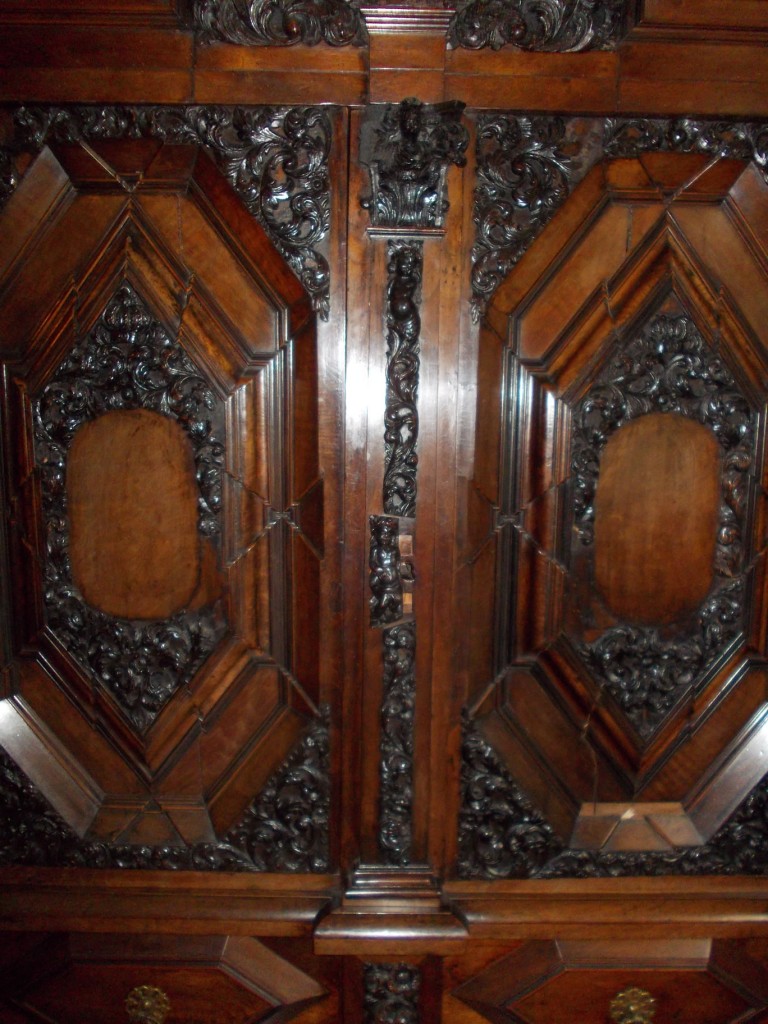 The lock behind the ‘secret’ panel is revealed! Click … cluck

The sounds of the creaking floorboards was also capture on the top floor of the house:

Elle examines a fossil on the limestone floor for it’s texture. Co Researchers are encouraged to explore all sensory forms, even if not strictly part of the exercise: 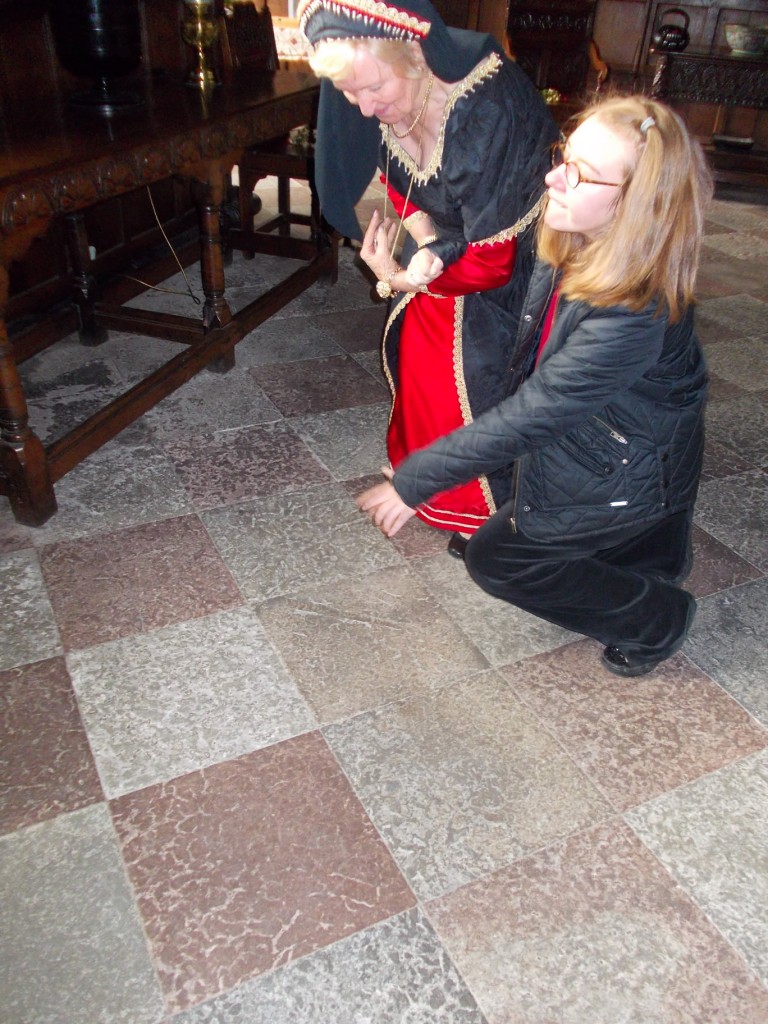 Elle examines the fossil of a belemnite for its texture

The picture below shows Elle ringing a bell in the kitchen to collect the sound. 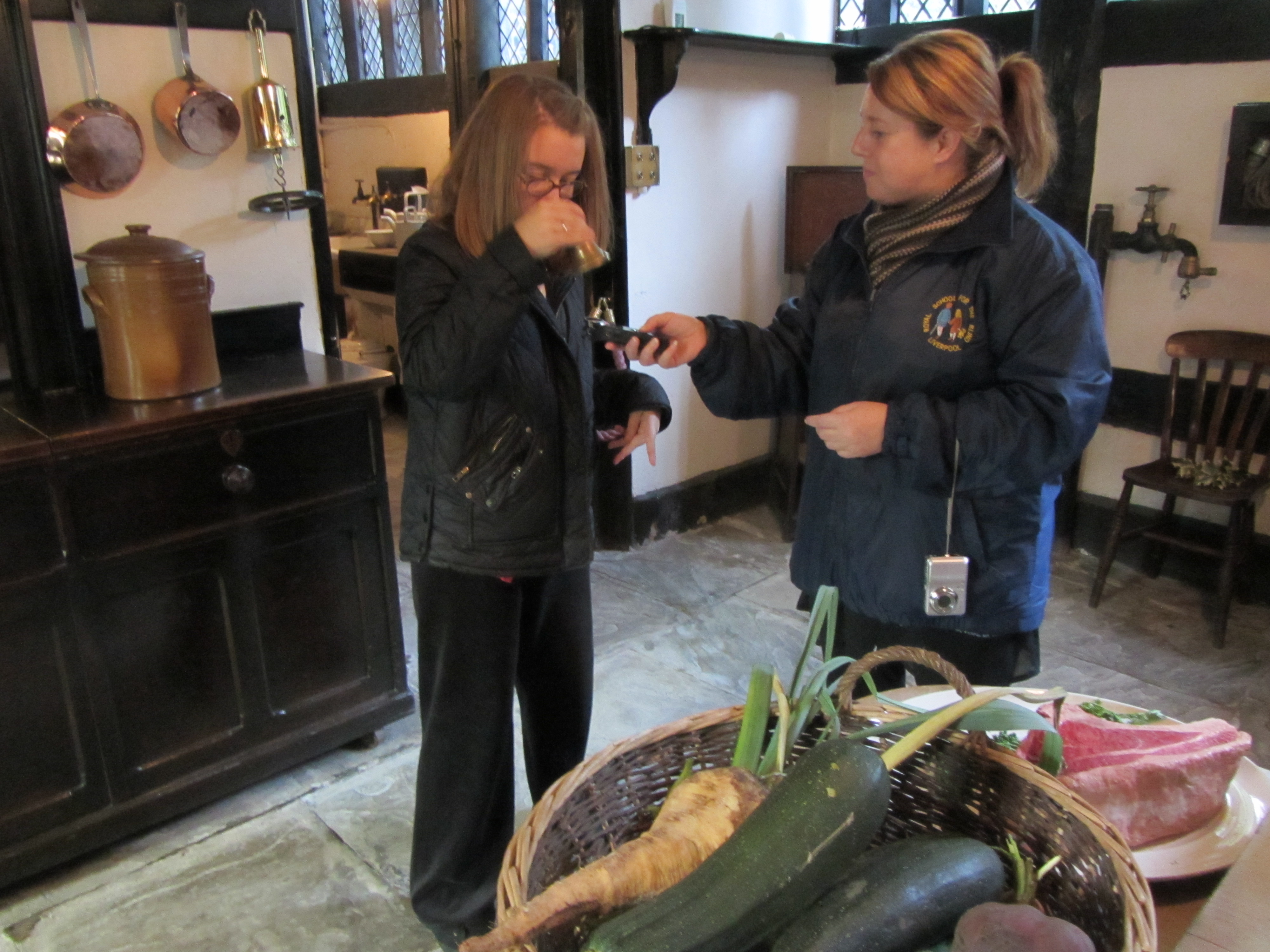 The picture below shows Elle using the sound recorder to record the sound of rustling fabric of Fiona and Veras costumes. 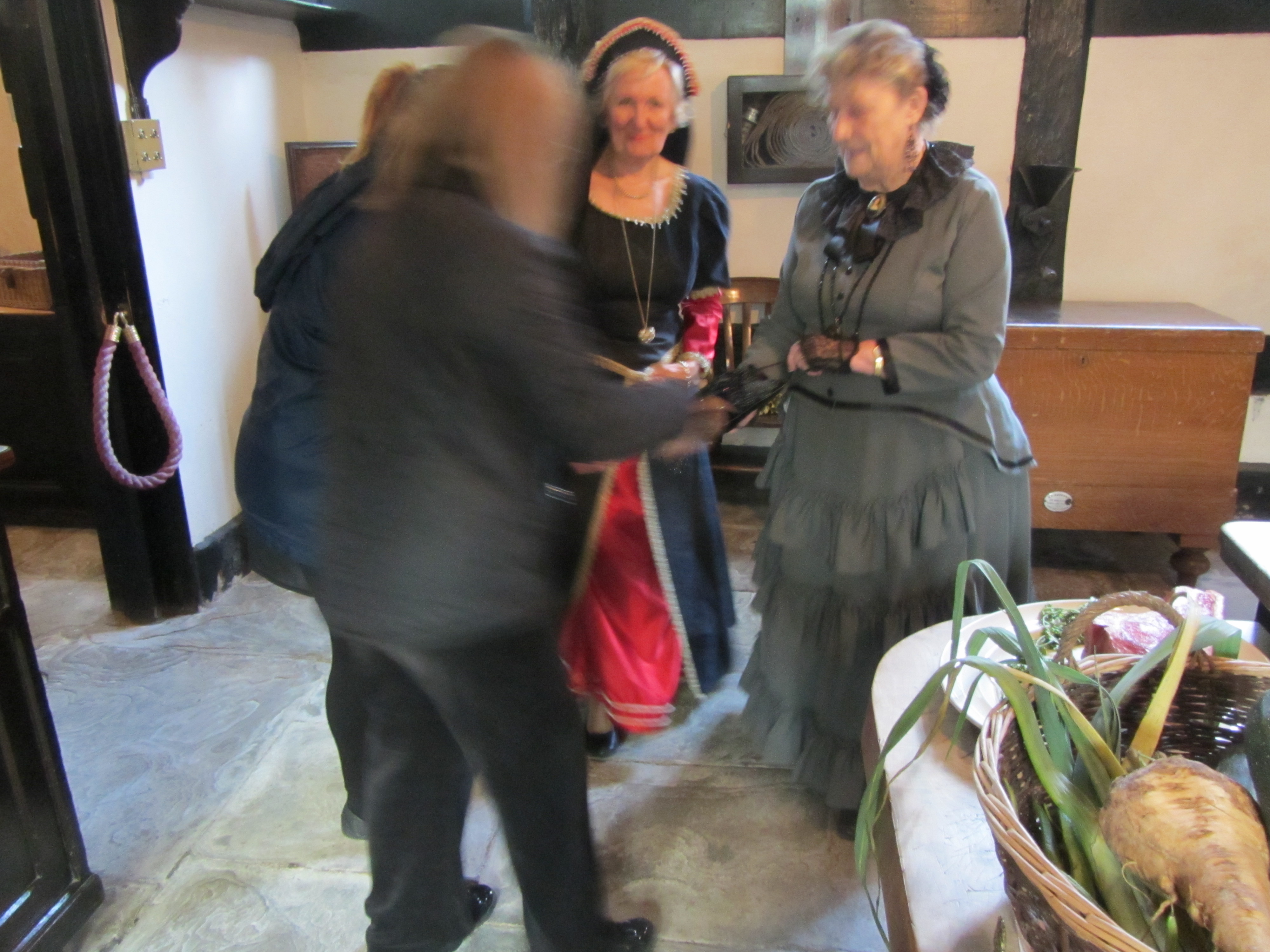 Elle collects sounds of the costumes

Dancing to the barrel organ from sensoryobjects on Vimeo.

Paul makes sounds in the kitchen from sensoryobjects on Vimeo.

Elle feeling and listening to book from sensoryobjects on Vimeo.

Elle in Kitchen from sensoryobjects on Vimeo.

sounds from the corridor carpet from sensoryobjects on Vimeo.

Here is a link to the Klik in Website showing Patrick’s photos and video clips from his first Speke Hall visit. 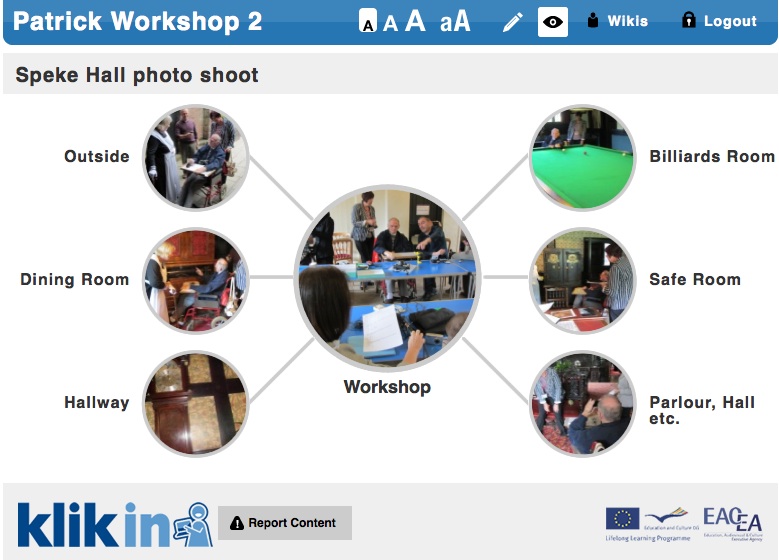 His images and clips have been uploaded to an ‘easy-build’ website. This is so that Patrick can look at his photos with his supporter, Gerry and they can add comments as titles and captions to whichever pictures they choose.

This is a first go at using easy-build ‘wiki’ websites to help our co-researchers like Patrick and Gerry to contribute their thoughts to the project these in a way we can build on from workshop to workshop.