The Aura of a Sensory Object

In the writing of Walter Benjamin, we find the concept of the ‘aura’, a special distancing or abstraction certain objects have. He describes it as ”the unique phenomenon of a distance, however close it may be”, going on to explain ”If, while resting on a summer afternoon, you follow with your eyes a mountain range on the horizon or a branch which casts its shadow over you, you experience the aura of those mountains, of that branch.” It is a remoteness, an eery foreignness. Benjamin was, of course, dealing with the photograph; pictures may also have a punctic effect, to use Barthes‘ term, wounding the viewer in a way he cannot quite articulate. That which is special to some appears ordinary to others, and thus to some have an aura.

It is this disconnect in perception that interests us. For a person with learning difficulties, an object may have a value or significance others cannot fathom. The person cannot say why the object is significant, and this causes a difference in perception we might call a type of aura. The person to whom the object is significant may see the tree, yet can only tell others of the shadow. It is through these objects, whose significance may be hidden from us, that we are left to reconstruct the discourse of learning disability history. Inasmuch as it is, in part, shrouded from us because it cannot be articulated as it usually would be, it is an auric discourse. We who observe from without are distanced from it, yet are fascinated to explore this mysterious terrain.

In effect these objects have a contingent: an extra specialness or relevance that the owner cannot articulate. This may explain their fixation. This is not a fetishisation in the usual sense, where an object or detail is fixated upon for unconscious reasons which go beyond articulation and can only be explored through psychoanalysis; the persons inability to explain his or her attraction is due to other factors, yet the result is exactly the same. In both cases, the reasons behind the attraction cannot be rendered in the symbolic.

You can read more of Matts writing on his blog HERE. The picture below shows Matt experiencing Sam’s Sensory Label during the Sensory Objects Showcase at The British Museum. 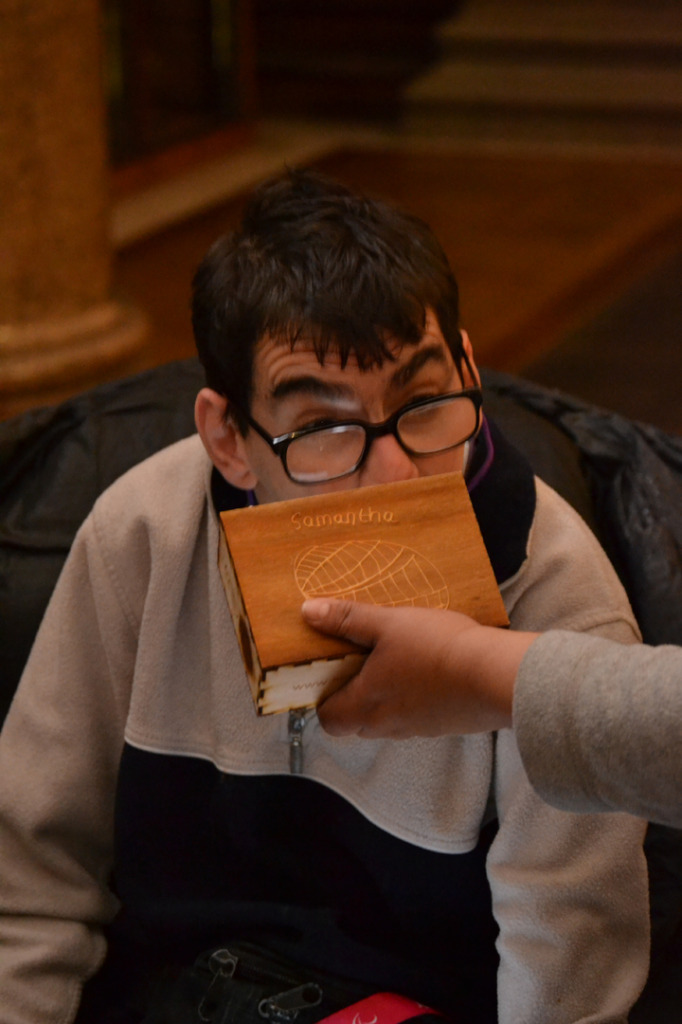