Ajay Choksi Wiki Master from RIX research and media and Kate presented a Sensory Objects poster at Engage 2015-Engaging with Impact in Bristol at the Royal Marriott Hotel  We also introduced ArtLab which is a project that has grown out of the Sensory Objects Research. ArtLab promotes Widening Participation and Research projects at the University of Reading. The text below is from the Engage Programme about the poster party event.

“Engage enthusiasts will be pleased to know we are hosting the fabulous Poster Party with over 30 people and teams keen to share their work with great ideas for developing more effective engagement, celebrate and network in style with nibbles and drinks – encouraging constructive and inspiring conversations from across the world.” The picture below shows the poster with Adalana showing her Sensory Label at the British Musuem, we also demonstrated some of the Sensory Labels, this was before they turned on the party lights! 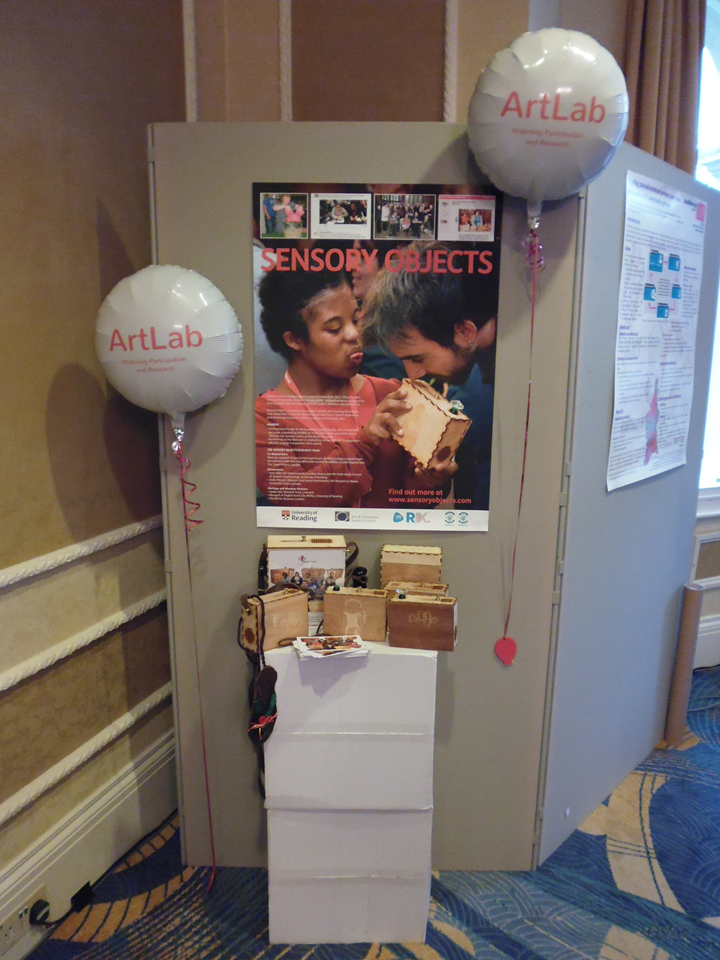 There were lots of people Ajay did a great job explaining about the project, demoing the Sensory Labels and showing the project Wikis. The pictures below show Ajay at work talking about Sensory Objects during the ENGAGE 2015 Poster Party, with some pink/purple lighting. 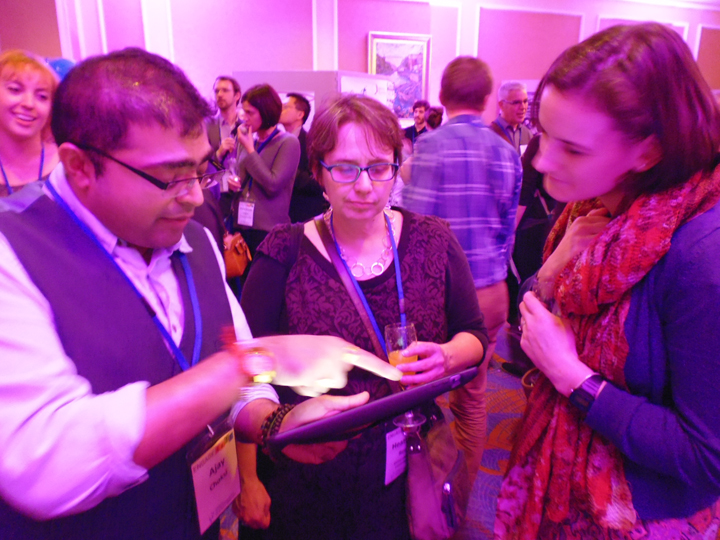 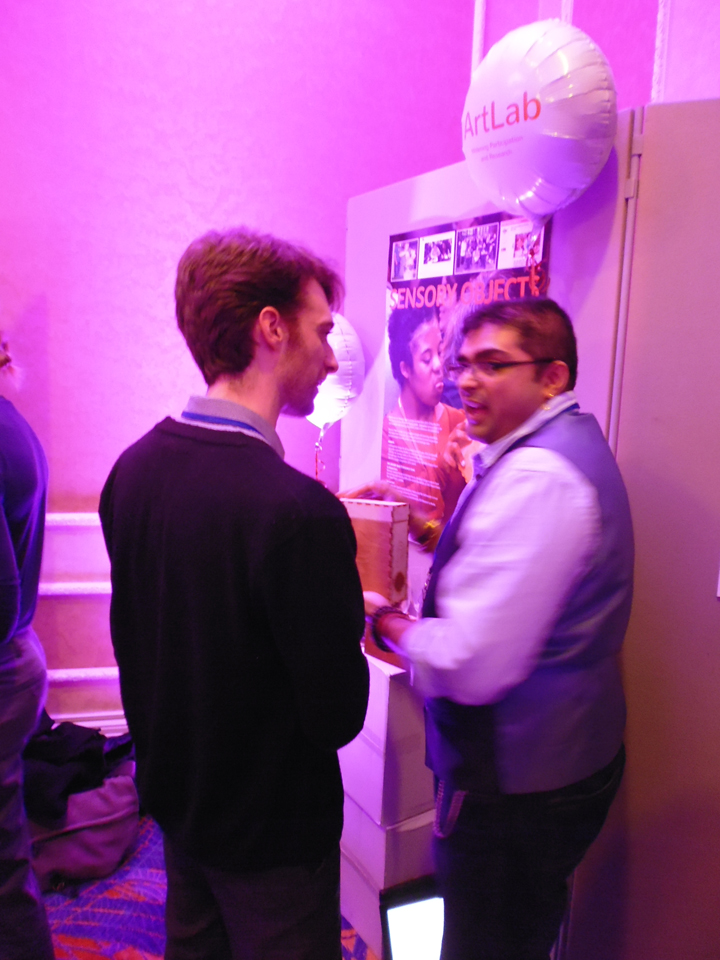 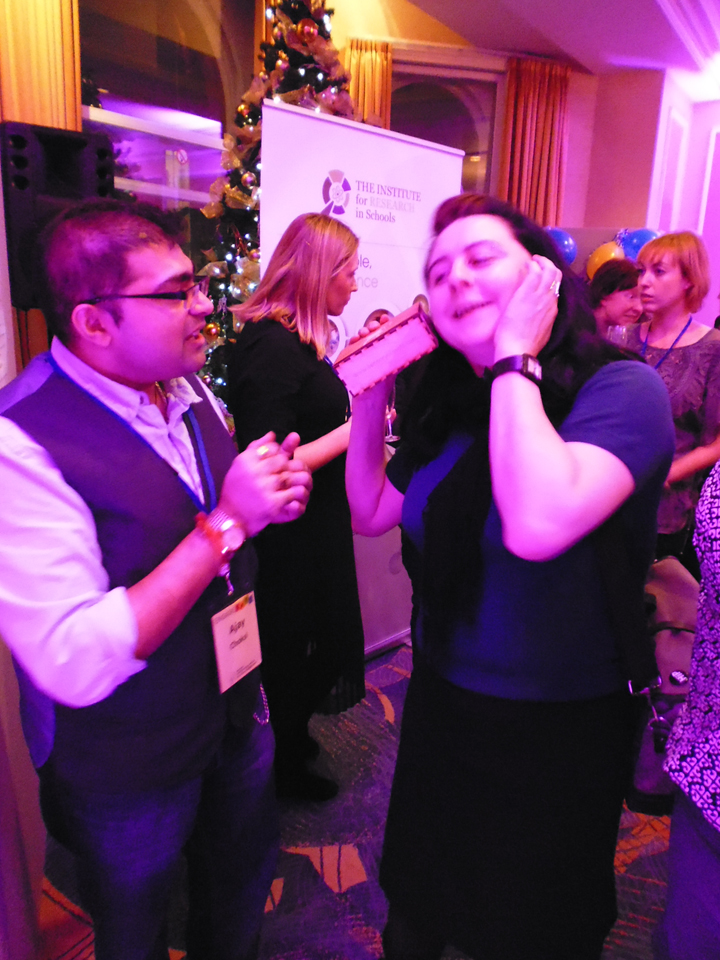 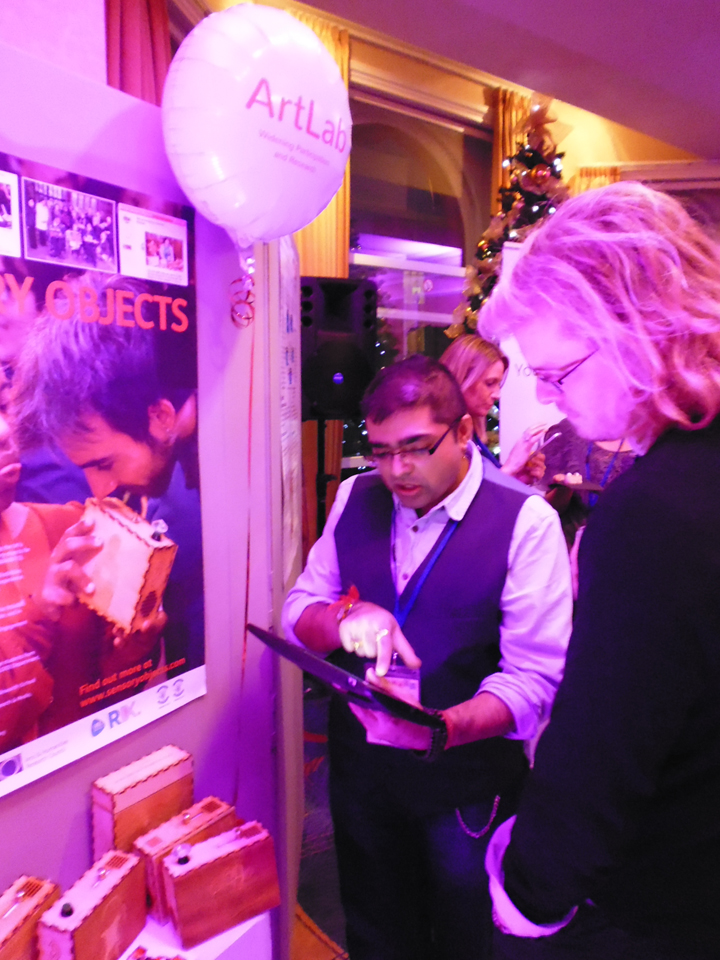 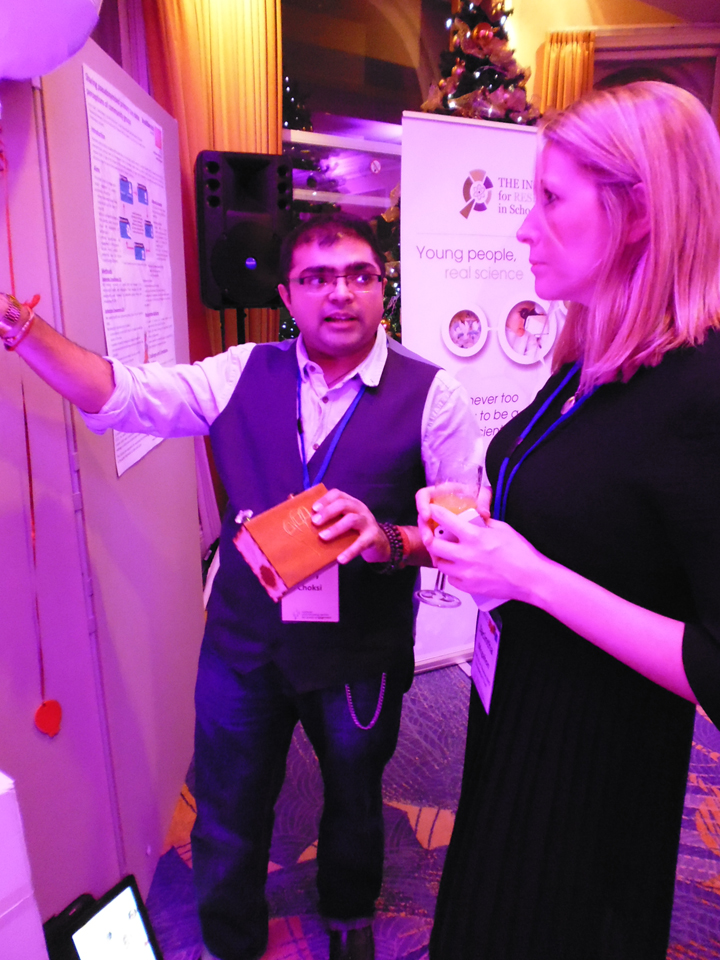 The Sensory Objects project was represented by co-researchers Judith Appiah and Tim Elson supported by Beverley Agard from the Tower Project, who co-presented with Nic and Kate at ENGAGE 2014 conference in Bristol. The picture below shows Judith and Tim preparing for the presentation with Beverley on the train to Bristol. 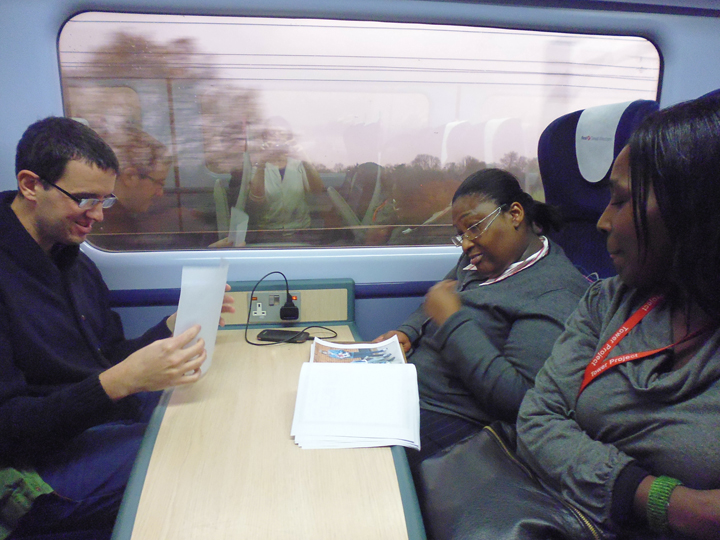 We arrived just at the Bristol Marriot Royal Hotel just in time for lunch where we met up with Nic. The picture below shows all at lunch. 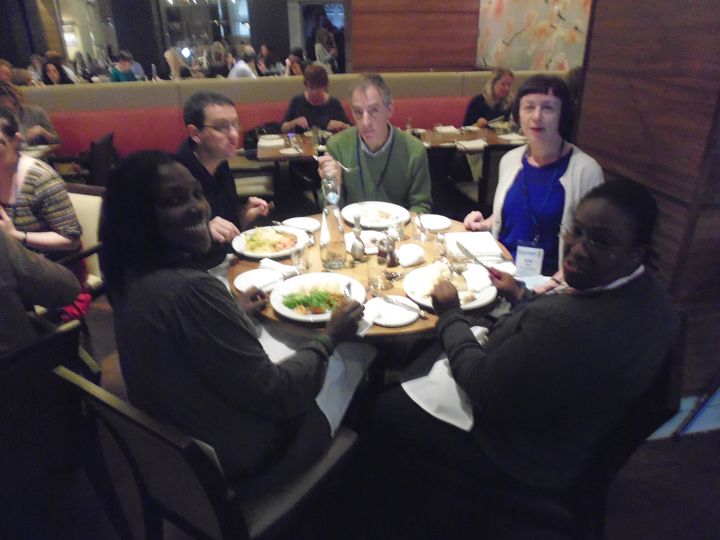 Our presentation was at 2pm we presented work from the three years of the project then had a hands-on workshop. The picture below shows Tim and Judith presenting. 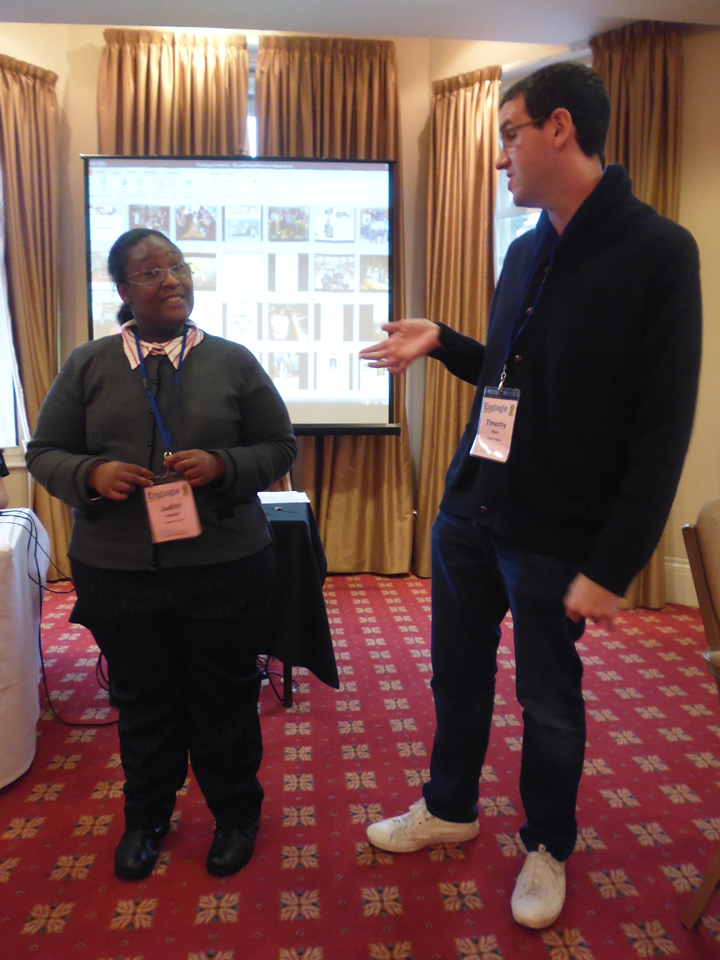 We showed some of the work from MERL, Sian’s mooing boot and Rumena’s Chicken. Judith explained about her chosen object, a pair of leather slippers, African treasure and how she has made her sensory label. As we were presenting our audience were tweeting so some of the the images below show the tweeted response from the audience. 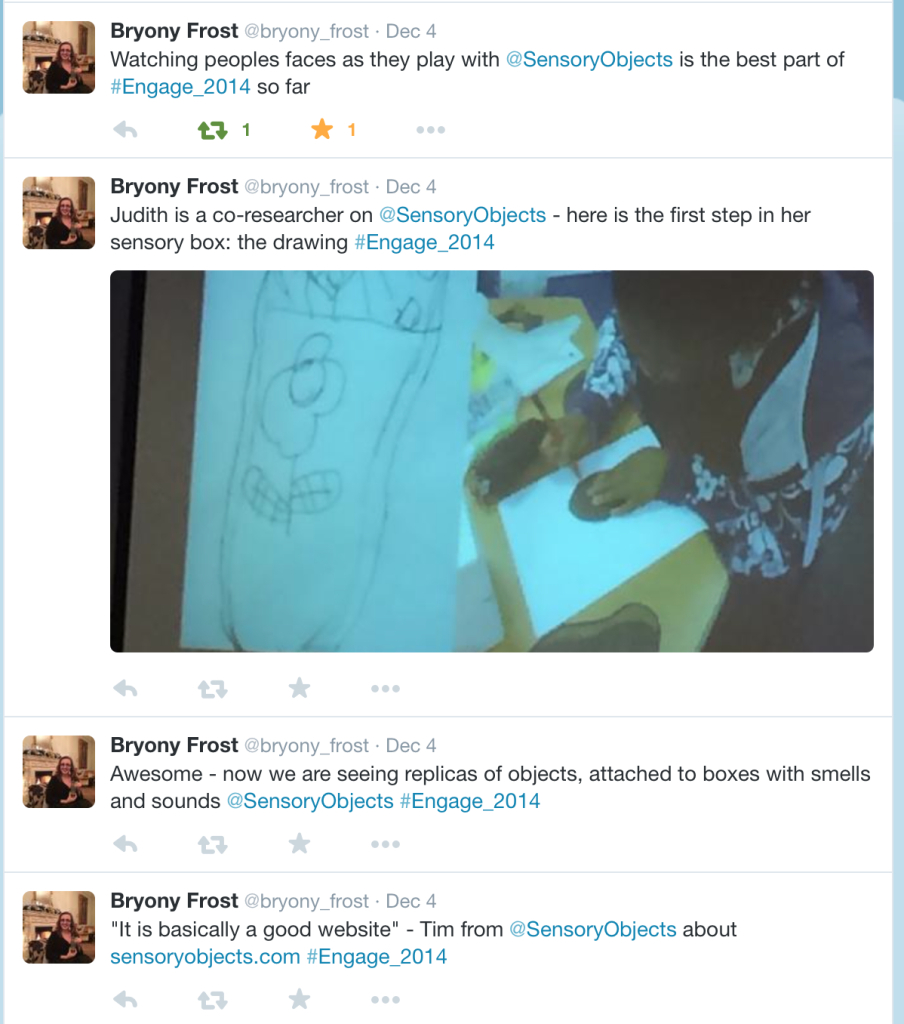 How Judith developed her sensory label 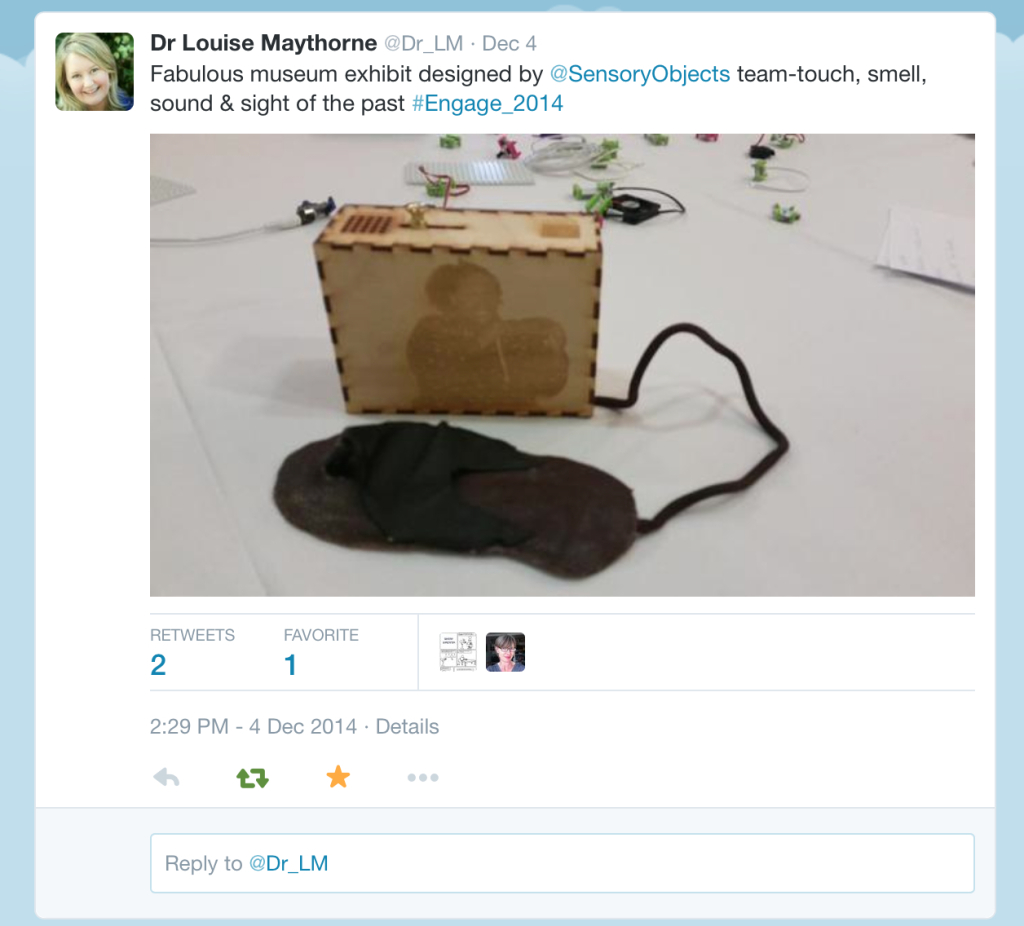 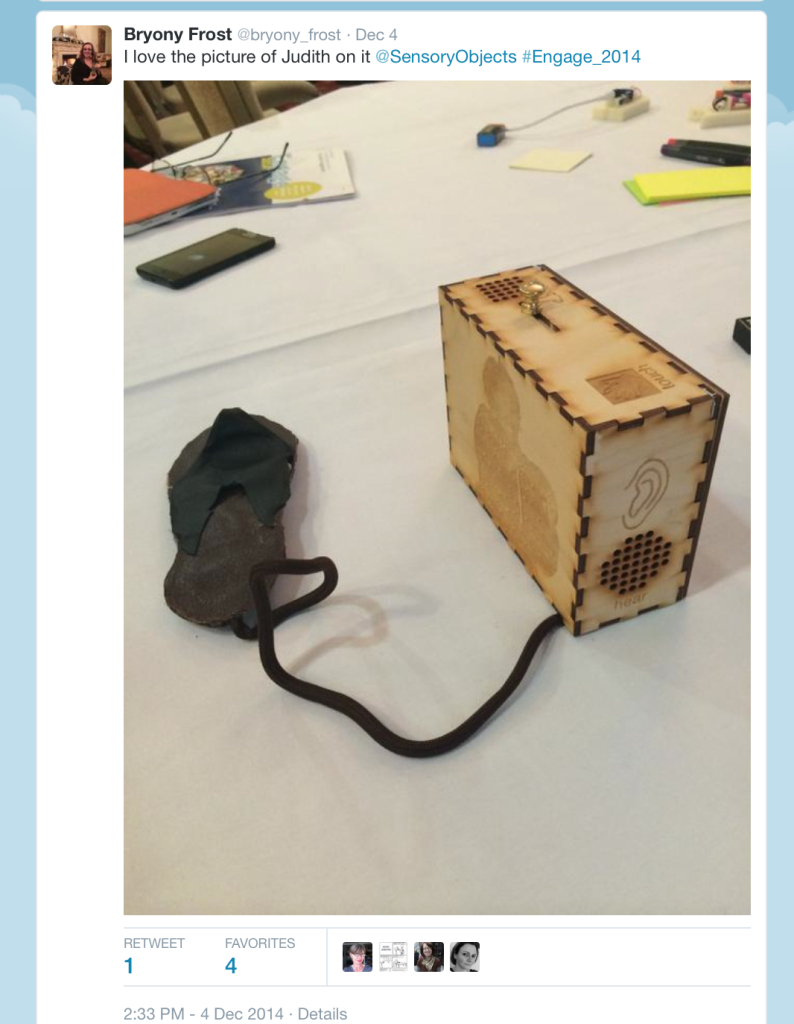 Next Tim spoke about the development of his Sensory Label. He showed a slide of the miniature sarcophagus in the Enlightenment Gallery and explained using his wiki his research of the object and how he had drawn an aeroplane because it reminded him of flying to Eygpt. 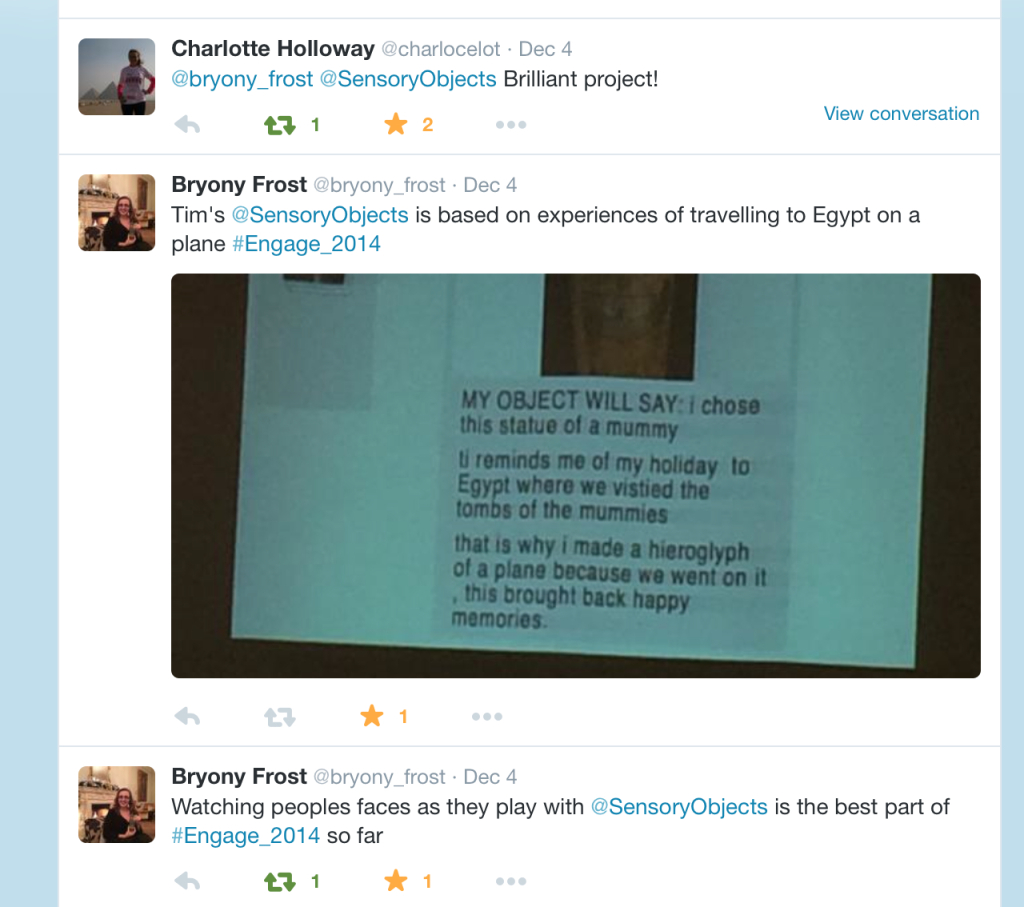 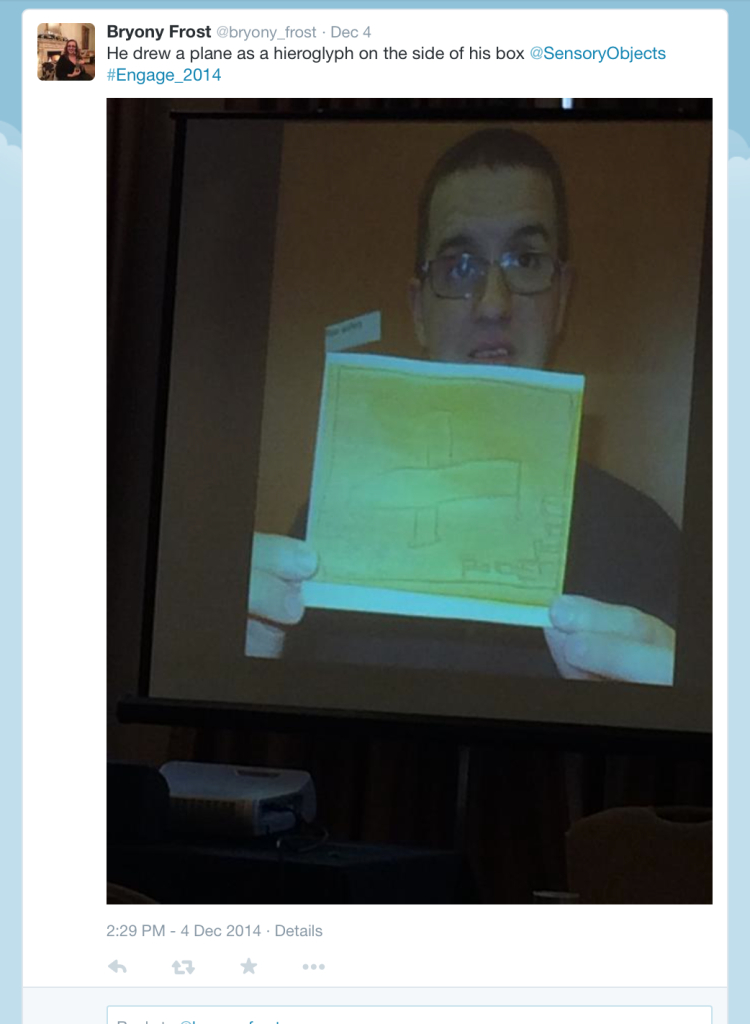 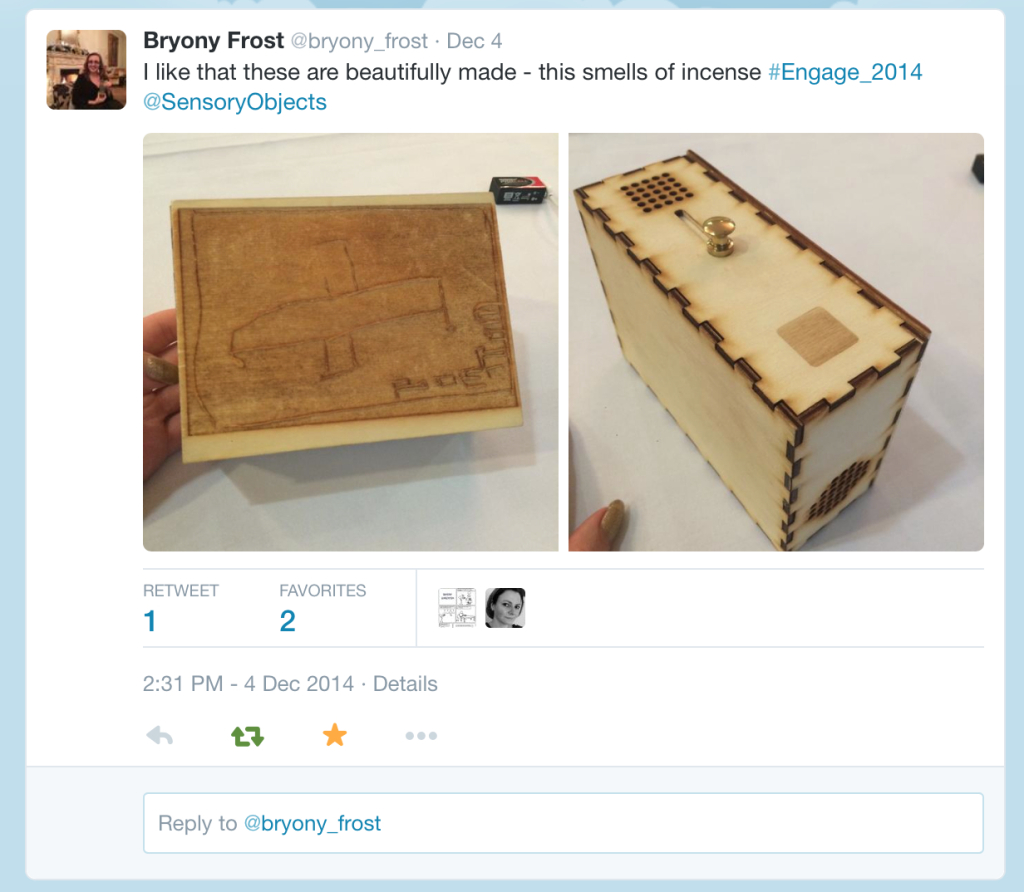 We told the audience about some of the other ideas for Sensory Labels including Justin’s ideas for the Warwick Vase reminding him of the FA cup and that he wants the smell of his box to be the smell of Cheese and Onion crisps and Beer as he thinks of this as the smell of success! This made people laugh and a response on Twitter, where some people liked the idea of the smell one did not. The picture below shows the discussion. 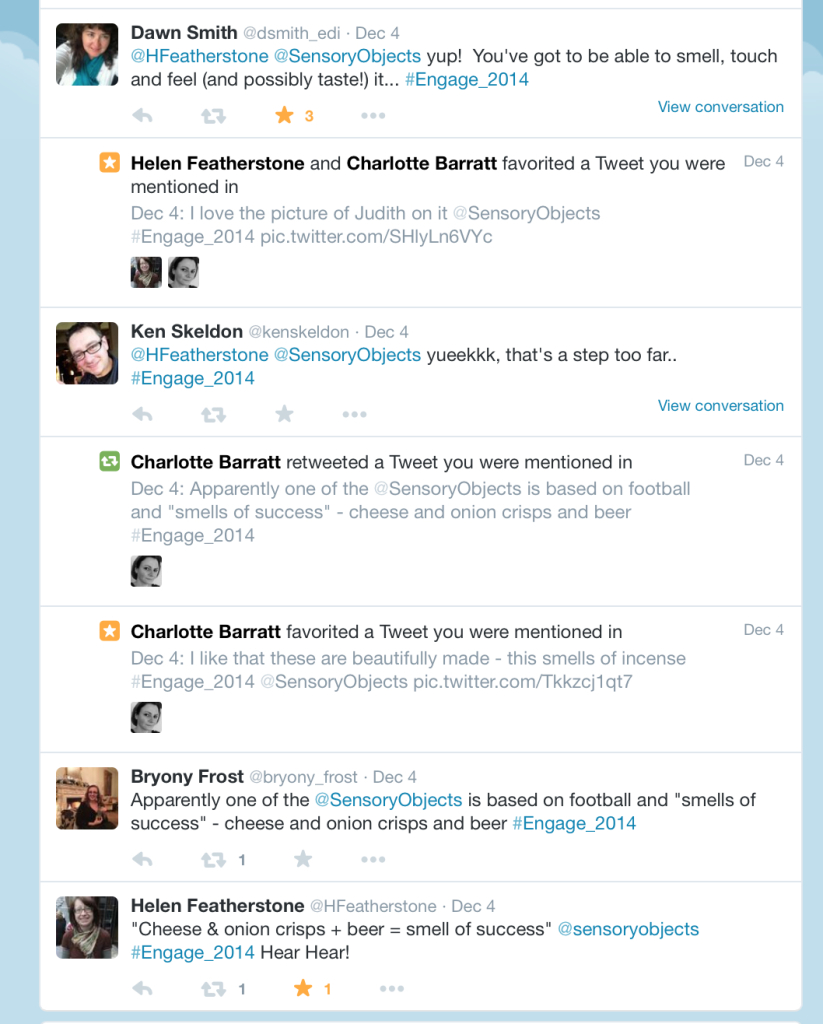 Cheese and Onion Crisps and Beer

Then we moved on to the hands on workshop part of the presentation we invited the audience to tryout some of the tools we have used in our workshops to help understand triggers, controlling sounds with sensors. We demonstrated Squishy Circuits, littleBits, sound boxes and littleBits go Large. 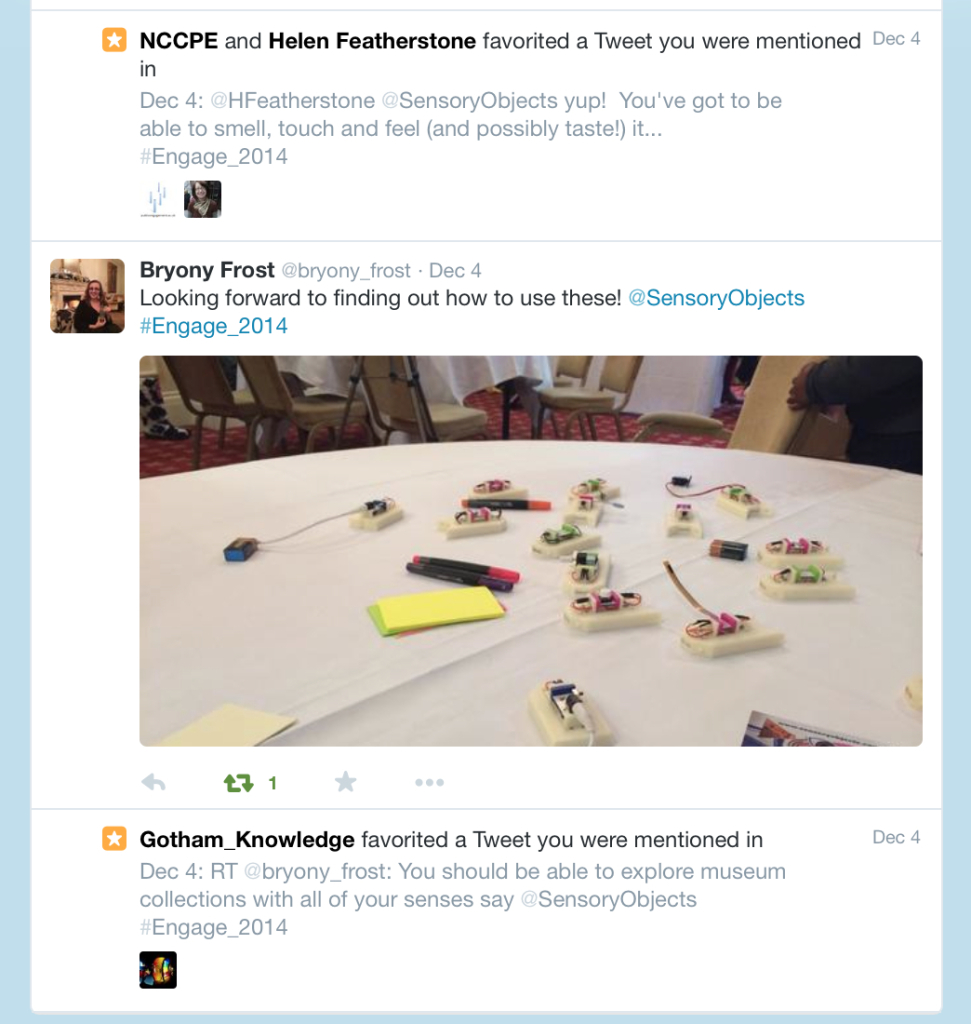 The picture below shows a tweet during the demos of little bits go LARGE. 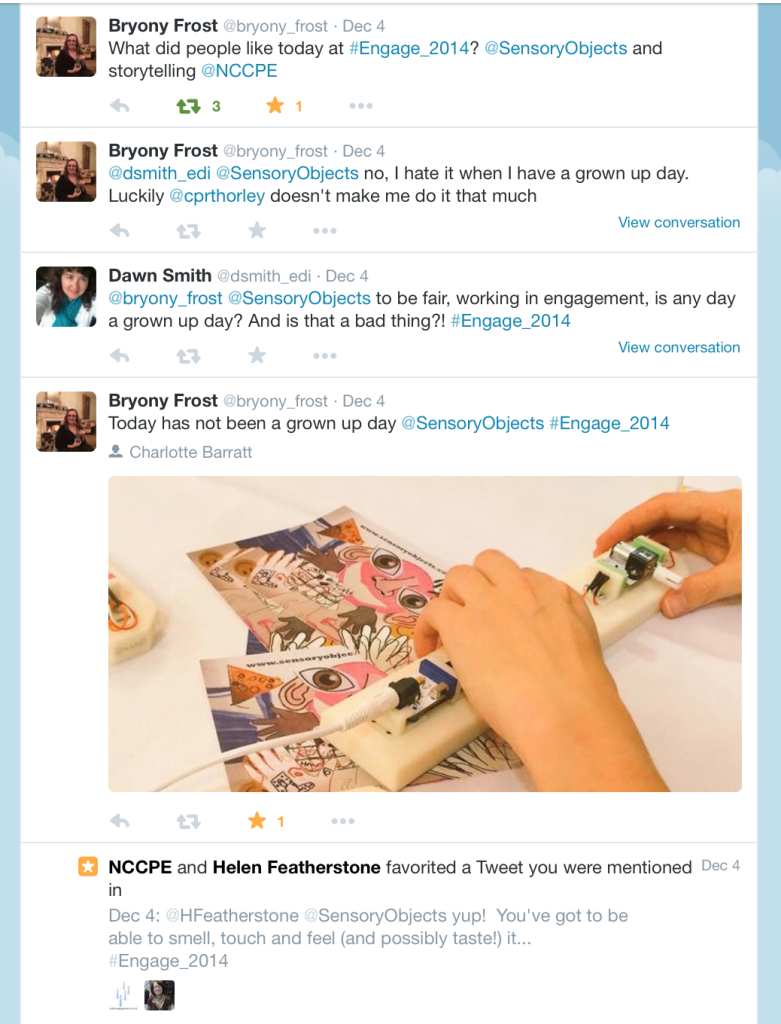 Tim and Judith sat at a table each and demonstrated how little bits and little bits go LARGE work while Nic explained more about the research ideas behind the workshop. The pictures below show everyone during the hands on workshop. 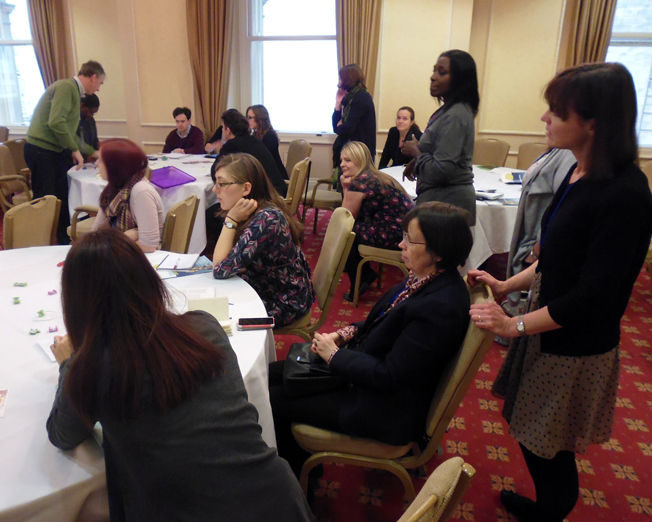 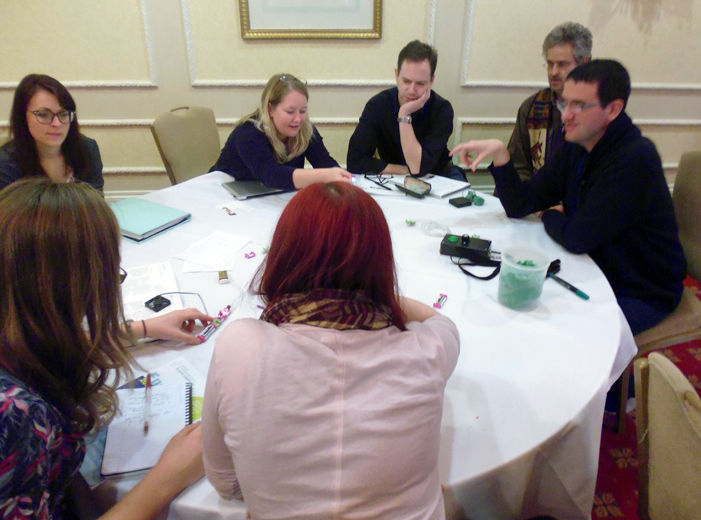 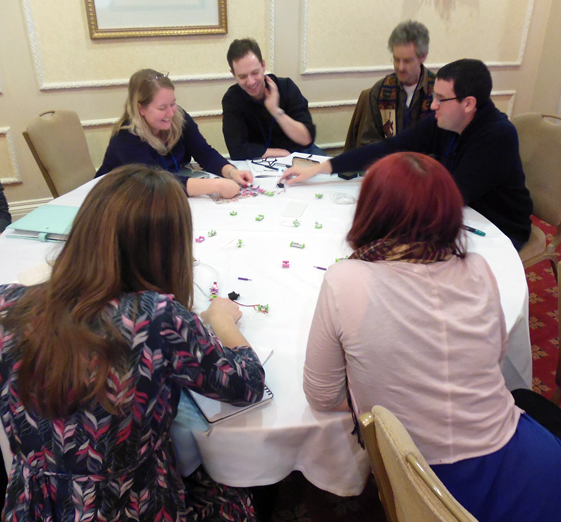 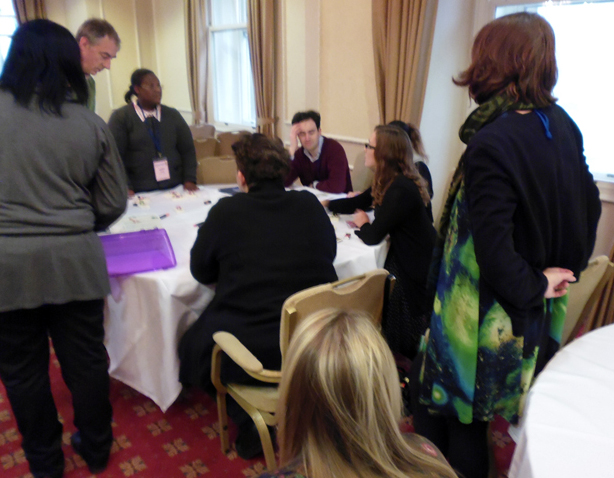 After the workshop we went listen to a presentation by Mohit Bakaya a commissioning editor for BBC Radio 4. He spoke about the need to widen the types of people presenting programmes to widen the audience who listen to Radio 4. We wondered if he would commission Sensory Object to make a programme? 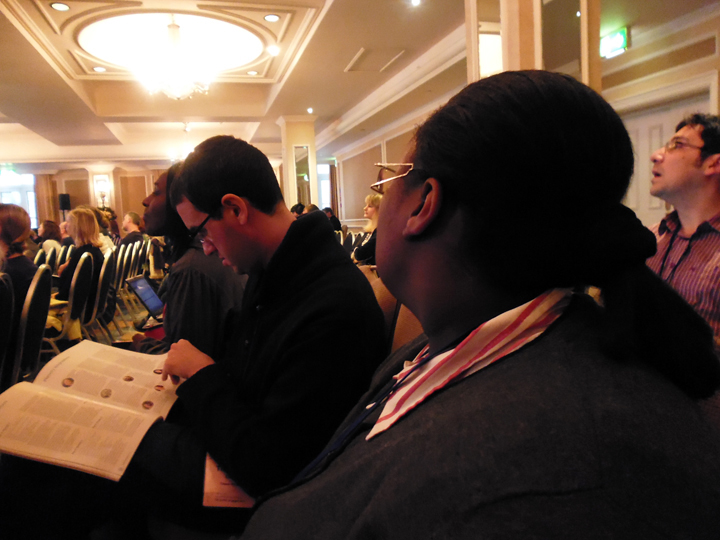 Listening to Mohit Bakaya from Radio 4 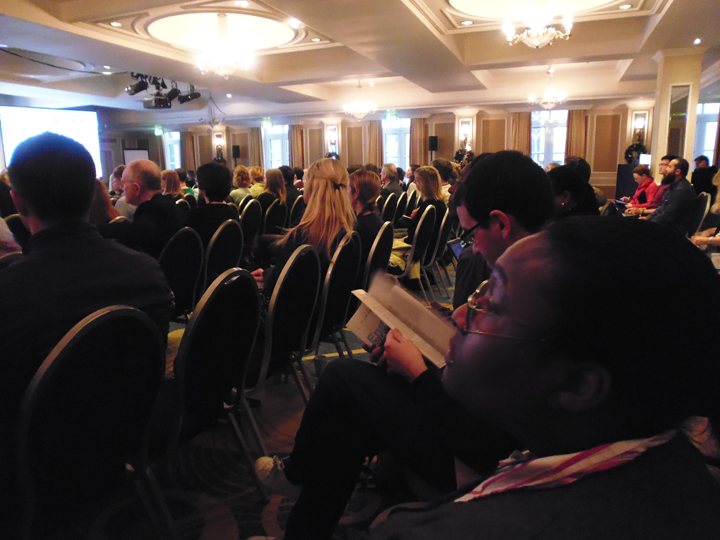 Listening at the Conference

We found the conference a really valuable experience, we learnt a lot and found the audience in our presentation were really ‘engaged’ asking lots of interesting  questions and were keen to find out more about the Sensory Objects project, discuss new ideas and opportunities. The picture below shows Tim, Judith and Bev about to leave the conference hotel. 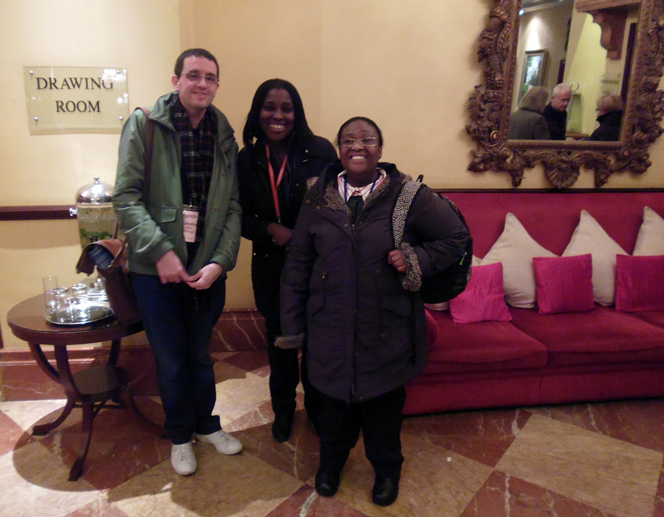 Hotel with Tim Bev and Judith

We were invited to the National co-ordinating centre for public engagement (NCCPE) Engage Competition award ceremony at the Natural History Museum London. 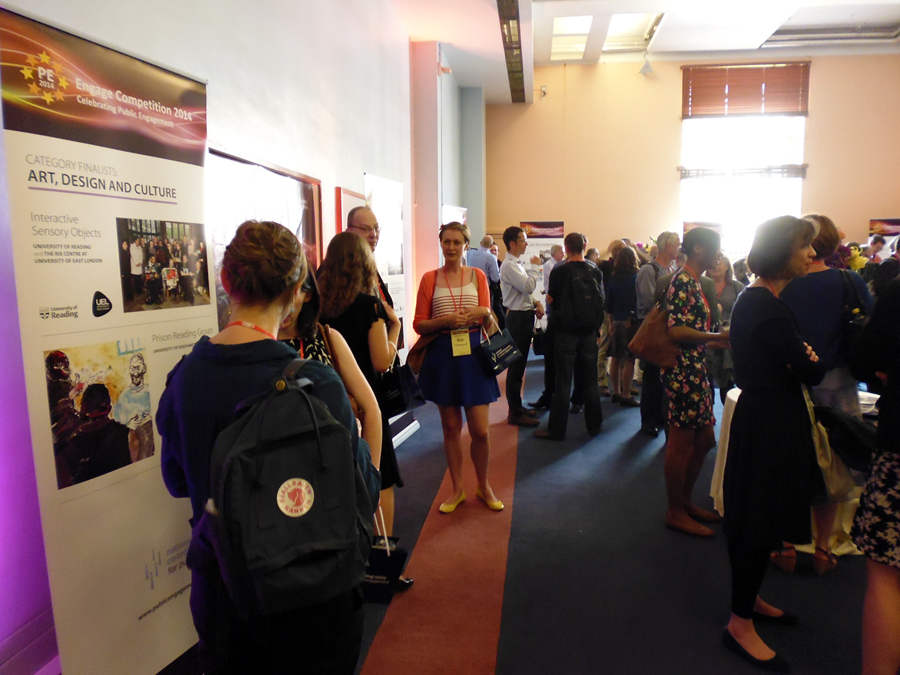 Only three people per project were allowed to go, otherwise we would have invited more of our research group to come along! The picture below shows Nic, Kate and Ajay by a banner showing our co-researchers in Liverpool. 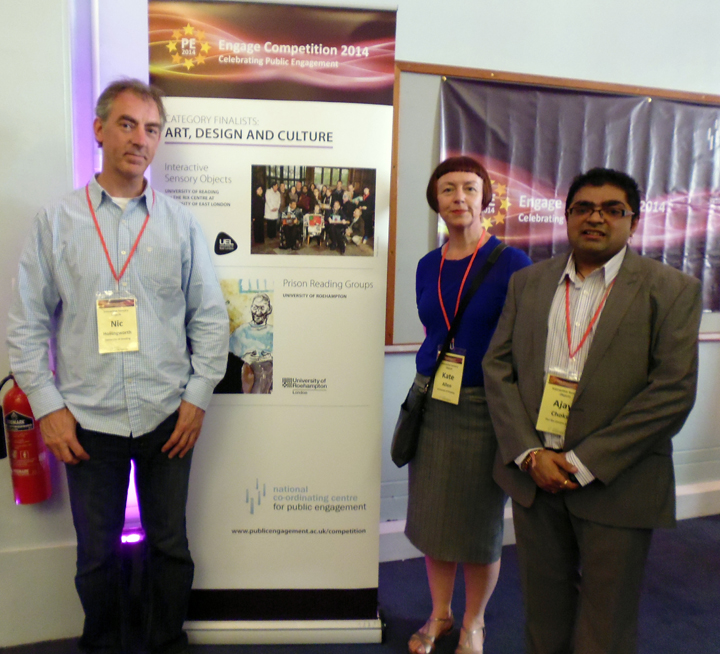 At the ceremony we watched videos from all the finalists projects in the final including Sensory Objects. You can watch the videos here

Sensory Objects were runners up in the Art Design and Culture Award. We were really pleased to be included amongst such great projects. The picture below shows our page in the finalist booklet and a crystal paper weight awarded to all finalists. 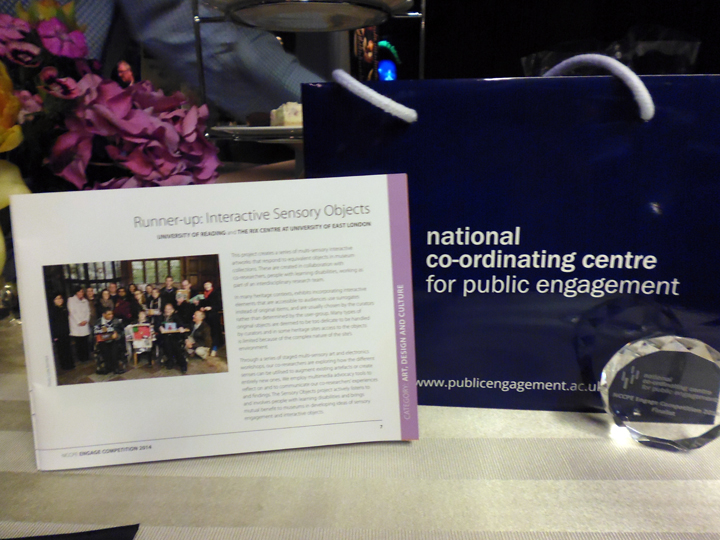 After the ceremony we were given afternoon tea see picture below, which we enjoyed very much! 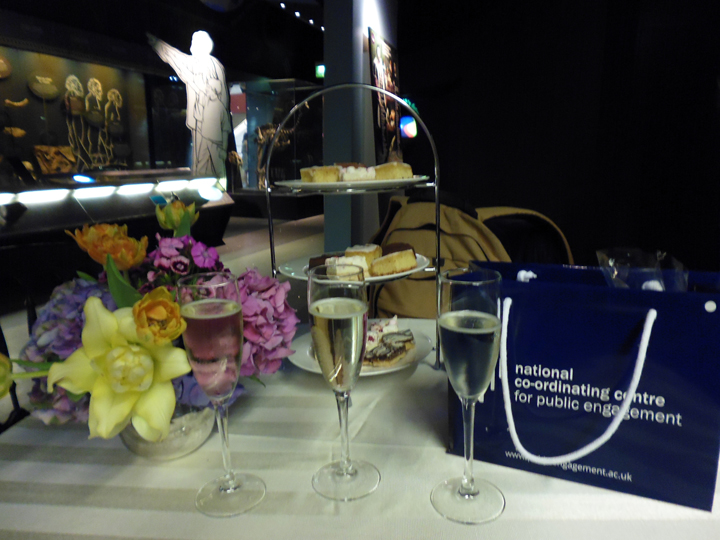 After the ceremony we were invited to take part in Universities Week Late at the Natural History Museum part of Universities Week, an action-packed evening to explore how research impacts everyday lives. We took part in the Researchers Cafe we had a menu of questions about our research that the public could talk to us about.

These were our questions: How important is it to be able to experience more than our sense of sight in museums?  Which senses trigger your emotions most? How do multisensory experiences improve museum experiences?

We made sure we took some props including Sians Moot and littleBits go LARGE to help our discussion. The picture below shows Nic and Ajay ready at the table. 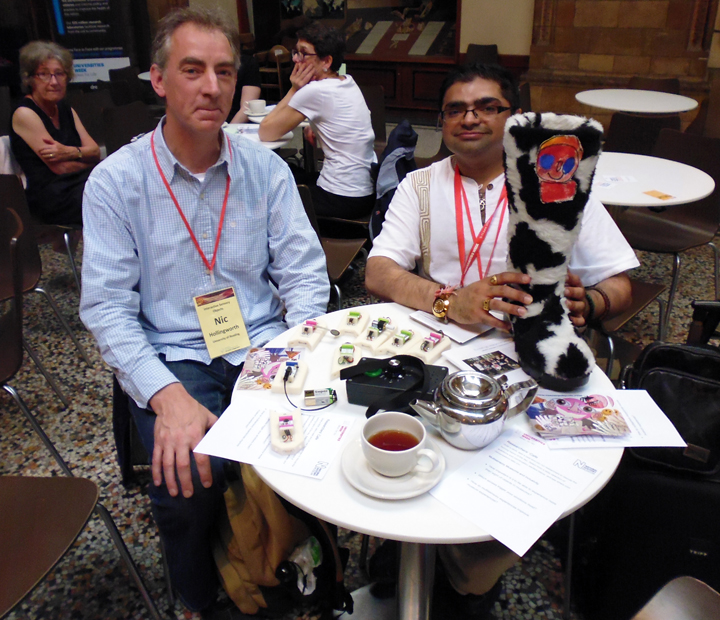 Nic and Ajay ready to discuss at the Researchers Cafe