Today’s workshop was primarily a reflective session, looking back on what has been accomplished in the previous workshops. At the beginning of the workshop, before the group arrived, the tables were filled with buckets, boots and baskets to show some of the work that had been created to date: 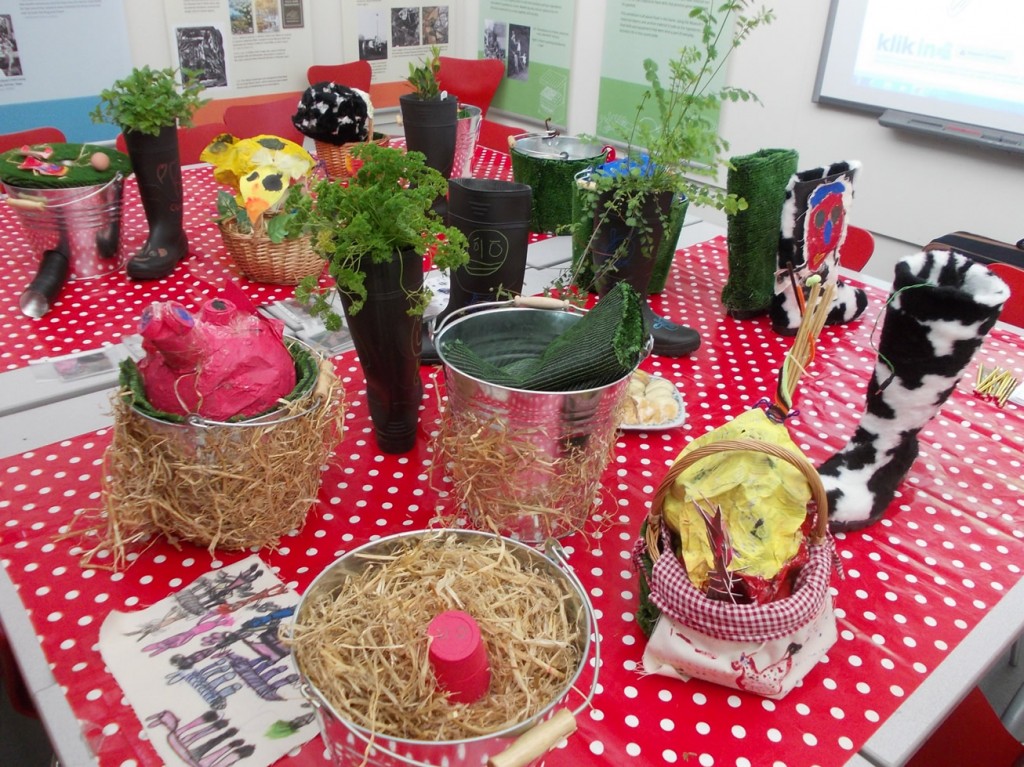 Buckets, Boots and Baskets – some of the finished works, and some works-in-progress

Some of the objects are not yet completed, and part of today’s session was used to help in choosing how to complete these works-in-progress. We’ll continue next Monday with these too. As you can see, the herbs that the group planted in the boots some months ago have grown significantly, and were carefully tended to by Robyn (not all are present here).

The workshop session was divided into two activities (divised by Gosia): a review and a photography session. For the review activity, each co-researcher was initially provided with a small collection of images that related to their work (things they liked, or have worked on, and included many images of themselves in the workshop sessions), so that they could begin by looking back at some of the things they had done in past workshops: 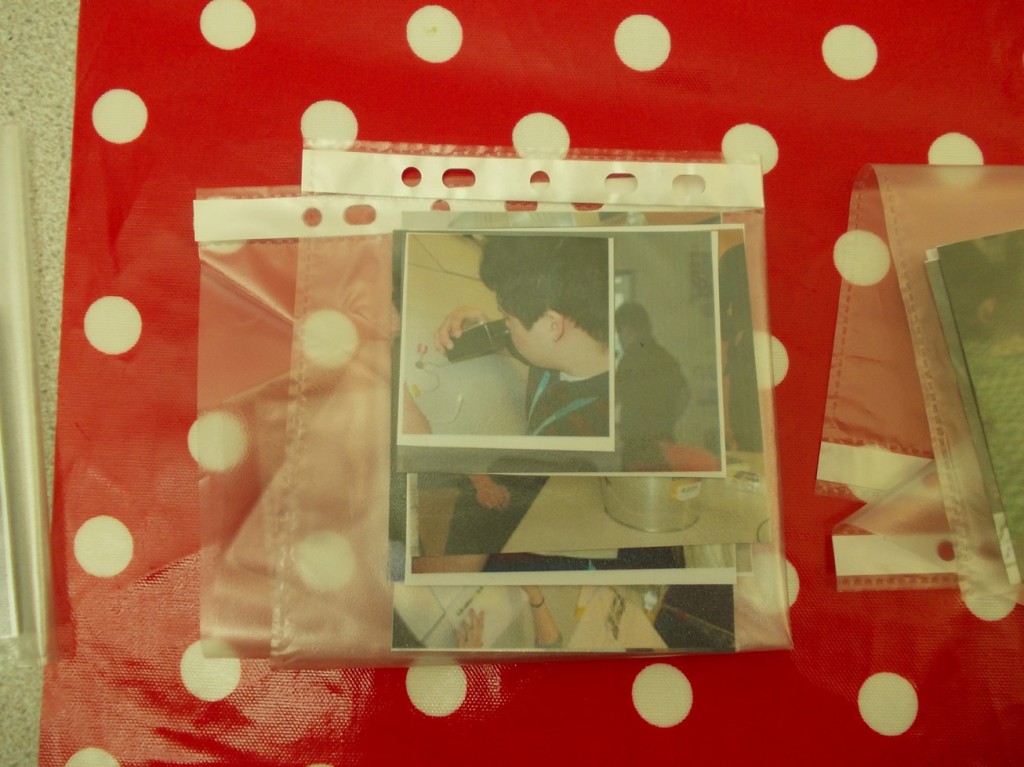 The co-researchers started out by selecting some of the their favourite pictures and videos from the project blog and from the wiki that they had co-constucted: 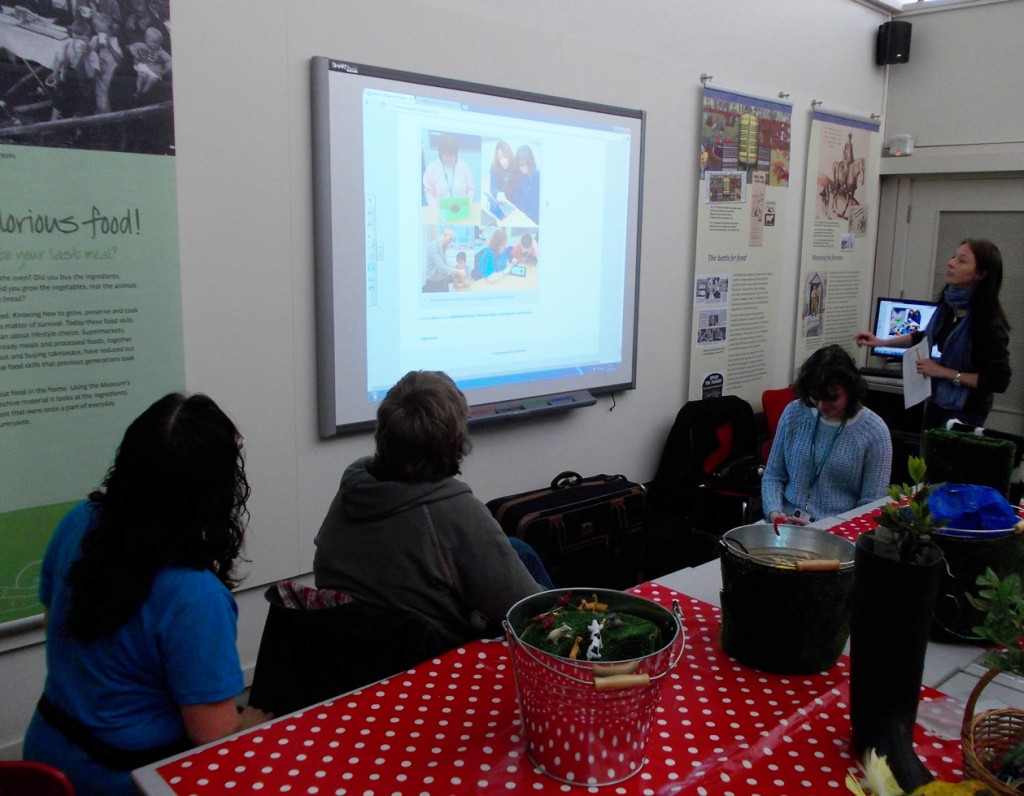 Looking at the blog

We wanted them to choose pictures or videos (or just sounds) that were meaningful in some way. This was quite difficult to do, and we worked one-to-one with the co-researchers. Selecting images and videos that are appealing is straightforward, but giving a reason why is often very difficult or not possible. However, it is perhaps more important that they were engaged in the task and looking at what they had done, regardless of the outcome.

Luke demonstrated his ‘hole-in-one’ bucket (missing the flag in this image): 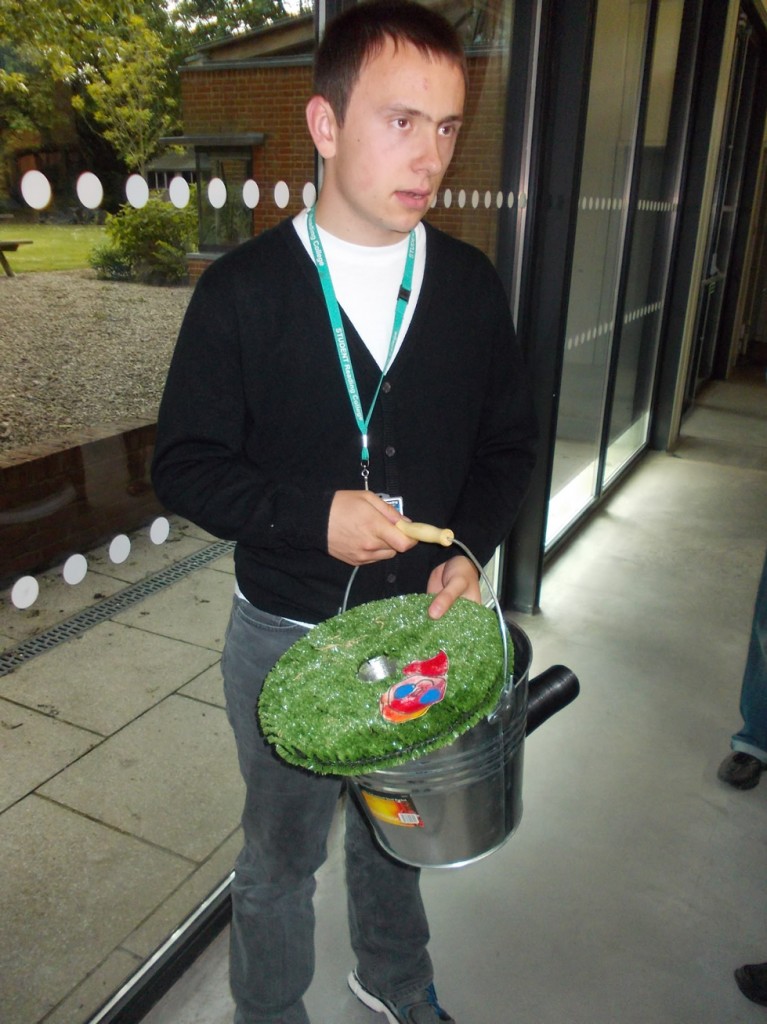 Skye demonstrated her animal farm bucket. It plays farm animal sounds randomly, and when completed it will also respond to the grass being pressed, where it will play a recording of ‘old macdonald’. 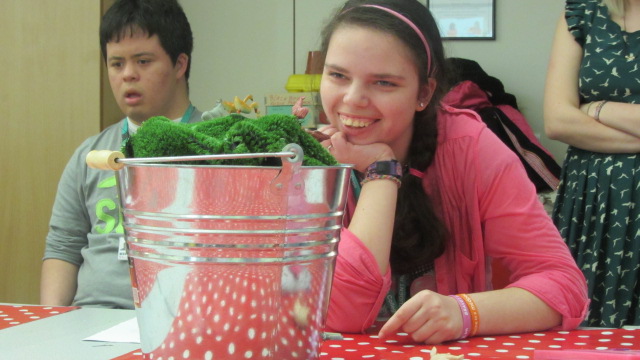 Skye with her animal farm

Rachel’s pig-in-a-bucket responds by grunting when the ears are being squeezed – the next addition is to add the pig’s nose (which has been difficult to create!) so that it will also respond to the nose being pressed. 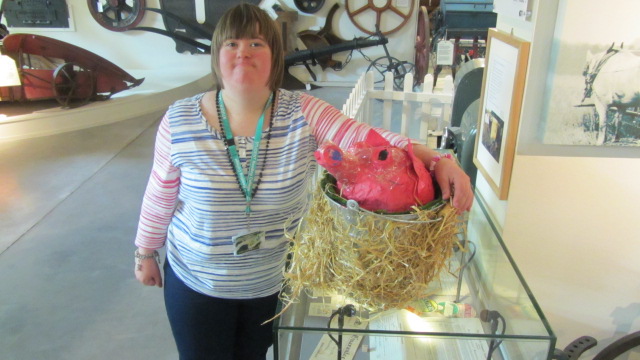 Rachel’s pig in a bucket

Sian took pictures of her mooing boot (the ‘Moot’) at different locations within MERL and then gave a demonstration of how it works: 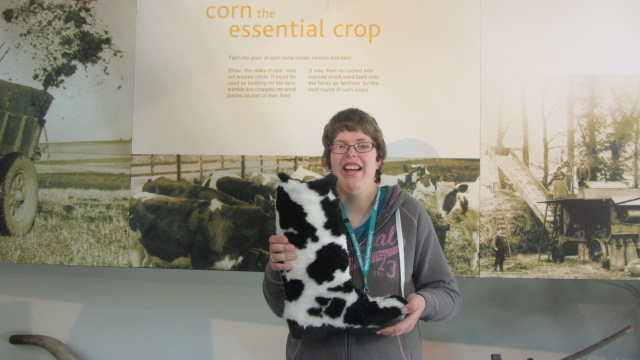 Some of the sensory object works-in-progress were not available to demonstrate, so the other co-researchers’ took photographs of some of the other artworks they had created at the workshops, placing them in locations around MERL, and also took pictures of thing they liked at MERL. The following is a selection of some of them (there were hundreds of images, totalling over 1GB, so we can only select a few): 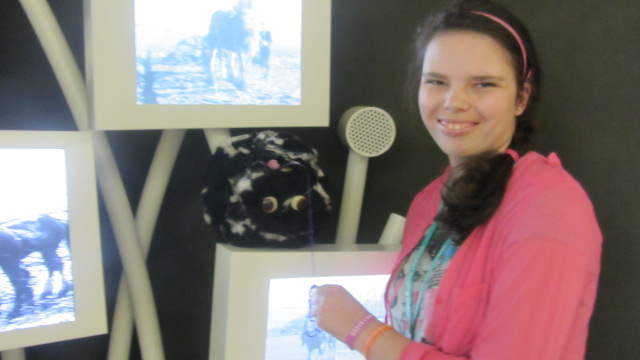 Skye with her animal 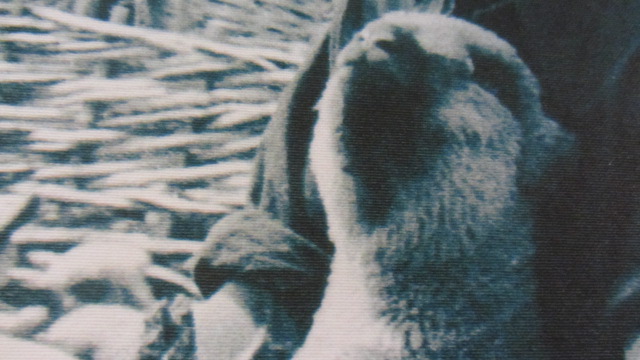 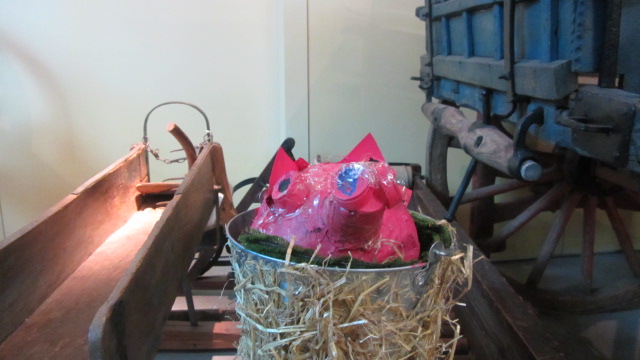 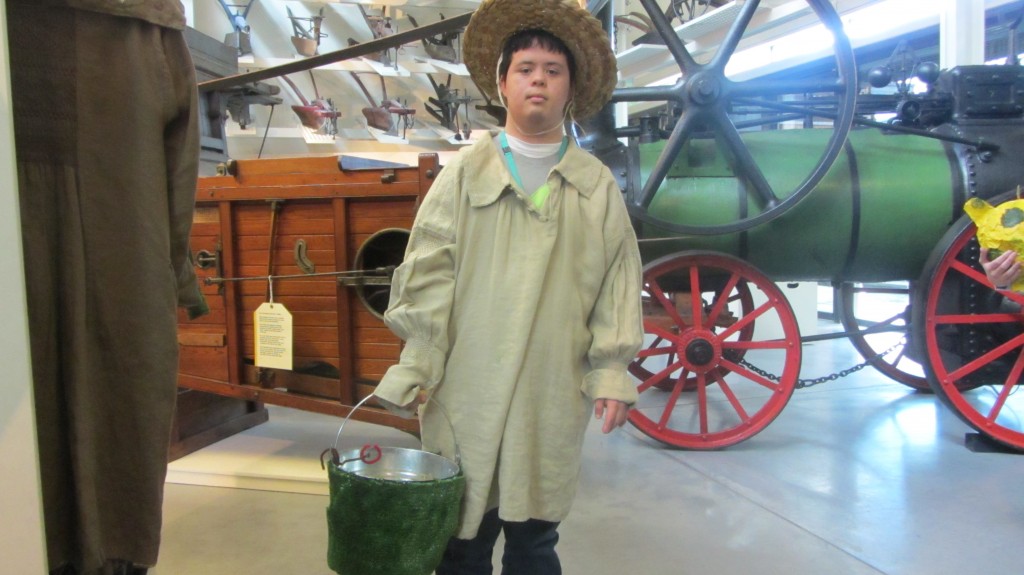 Guillermo as a farm worker 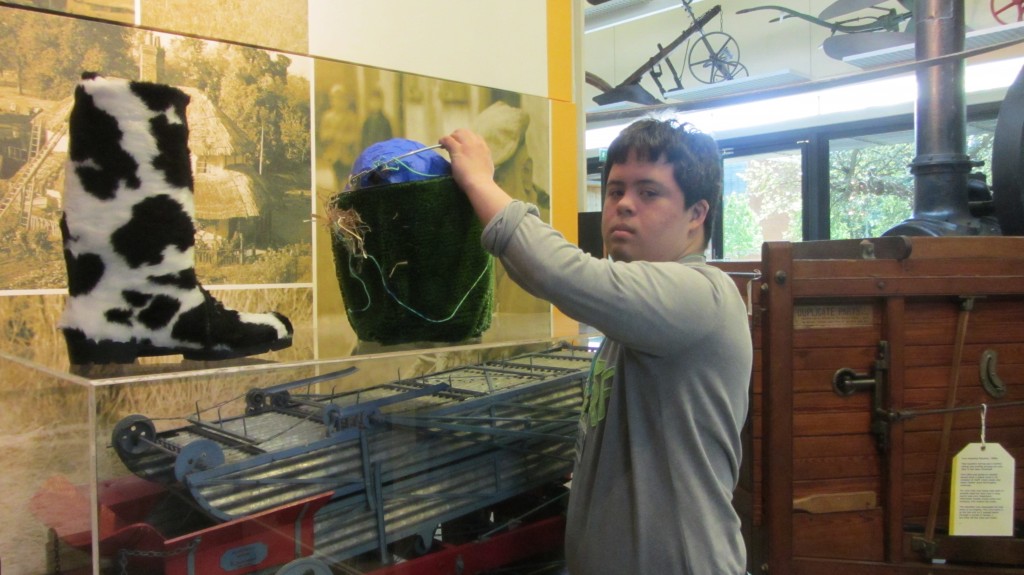 Guillermo placing some of the objects in MERL for photographing 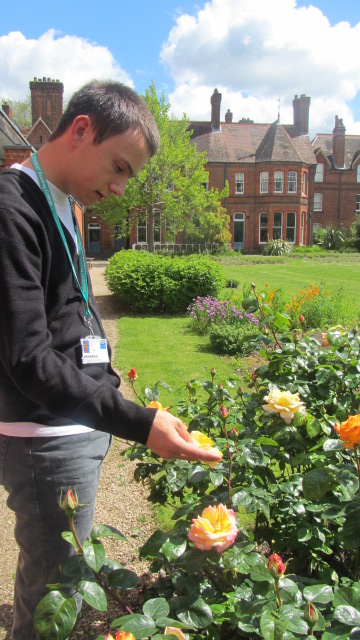 Luke examines the flowers outside of MERL 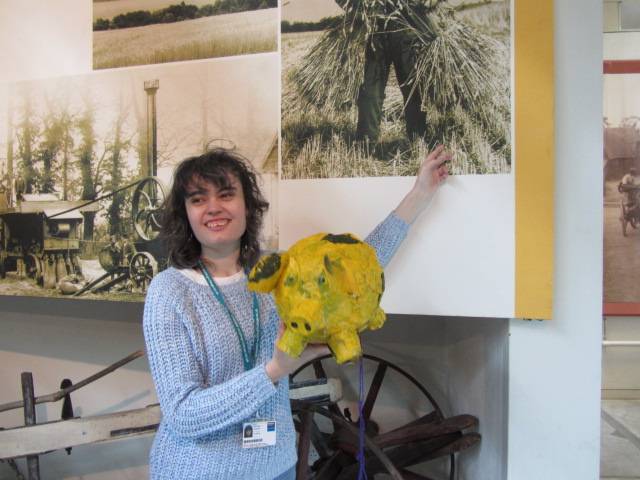 Rachael with her yellow pig

Towards the end of the workshop, we had a music session starting with Old Macdonald. We played a video which had the soundtrack of Old Macdonald plus Makaton signs which many of the group could understand: 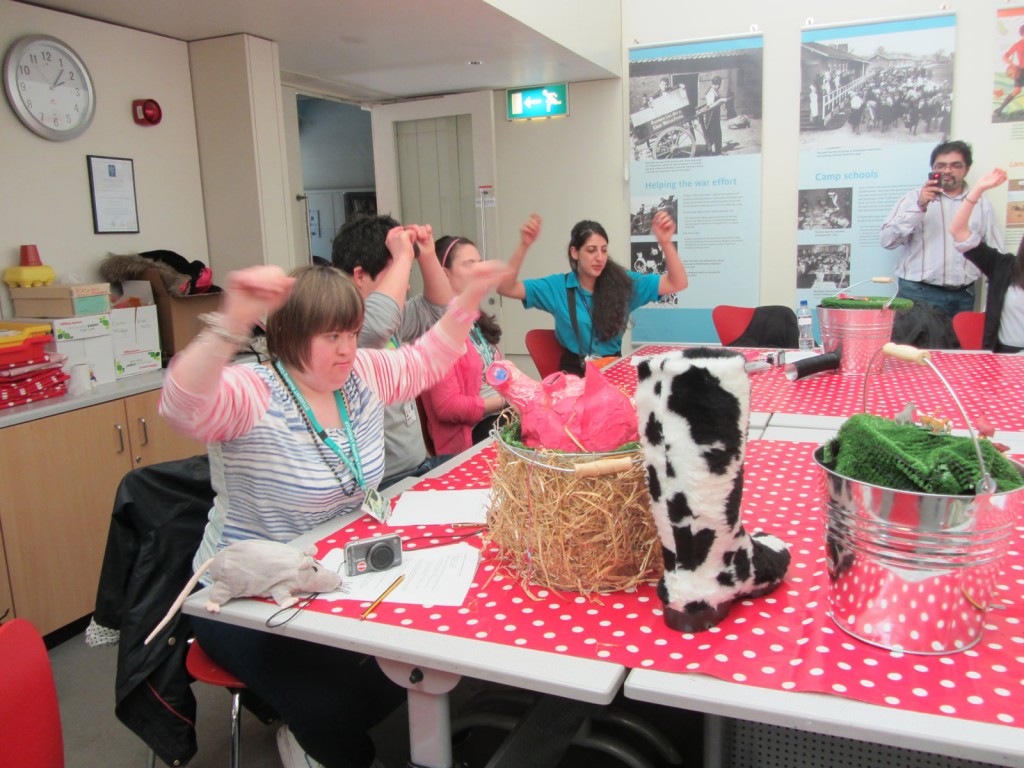 See Mooing boot for an update on Sian’s mooing boot. 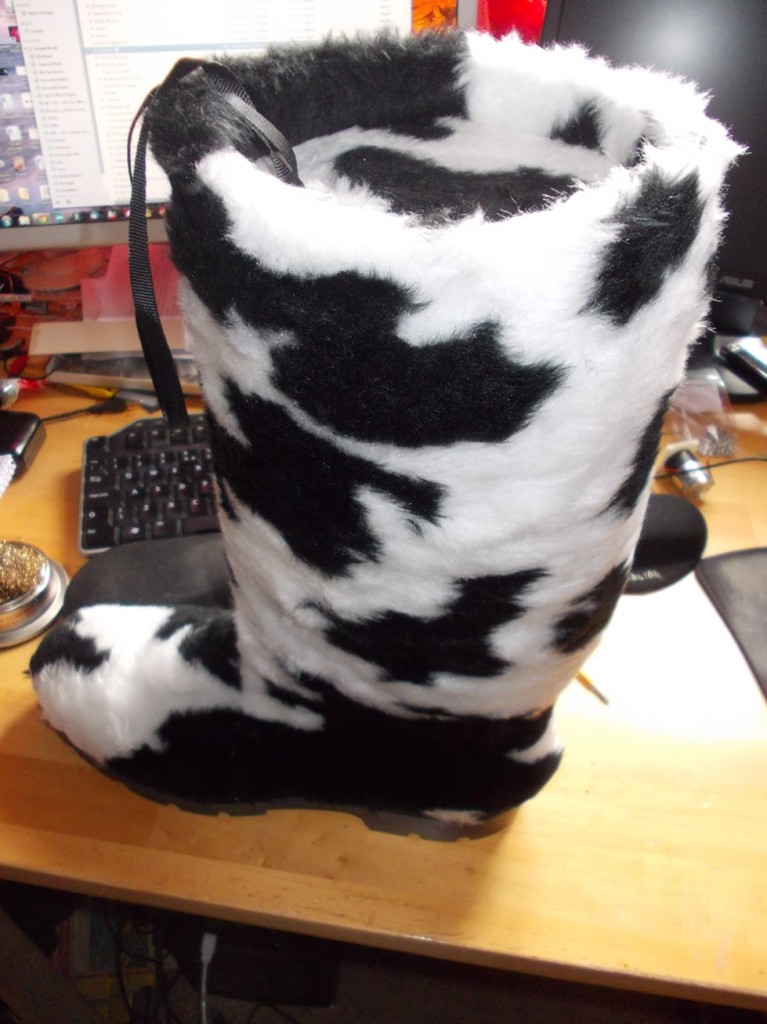 In workshop nine we first first reviewed the activities from the previous workshop, and on the tables we arranged the artefacts that the co-researchers had created: paintings and drawings on canvas to be attached in some way to either a bucket, boot or basket, the papier mache covered balloons which will be continued today, and will be made into a farm animal (or possibly even a speech bubble) and a brief review of how sounds could possible be added to their artwork to make them more active and interesting. 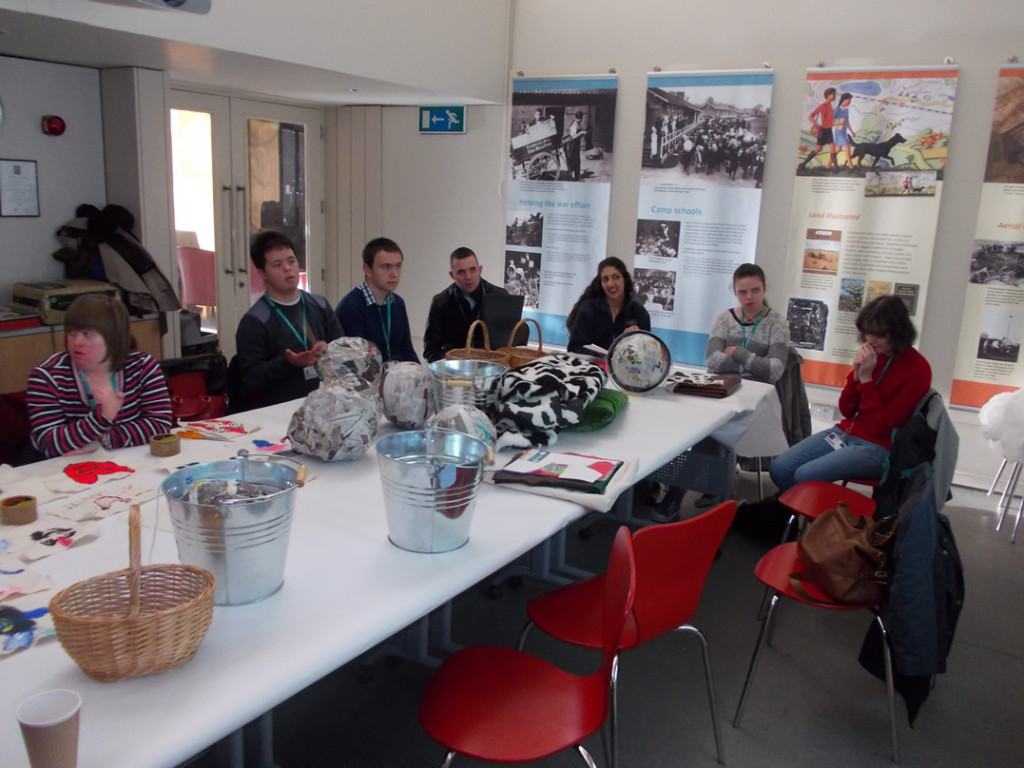 Table laid out with artwork from the previous workshop as a reminder of what we will be doing in the activities of the day.

The morning session started with a taste of orange, nuts and dried fruit provided by Robyn: 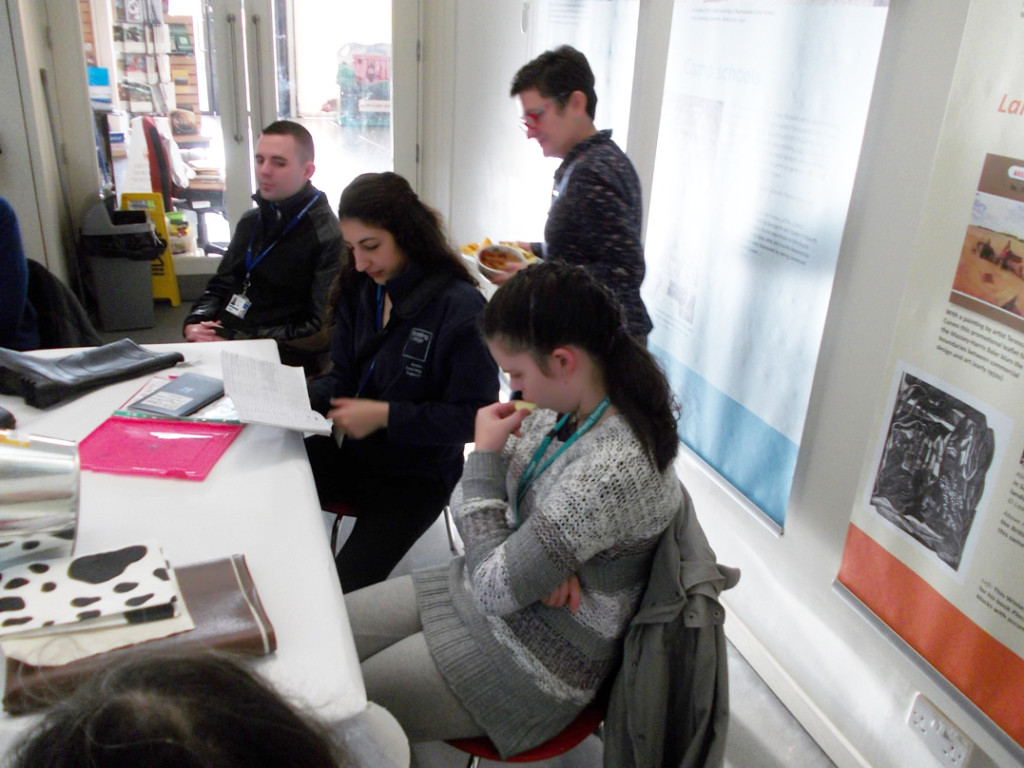 Robyn provides a sensory stimulus to start the morning session

Kate then talked briefly about the aims of the workshop (continuing with the farm animal, and thinking about ways in which it might be interesting to make it more active by adding sounds and/or light or video) whilst Nic and Toni showed an example of how a sound could be integrated in a bucket using a surface speaker: 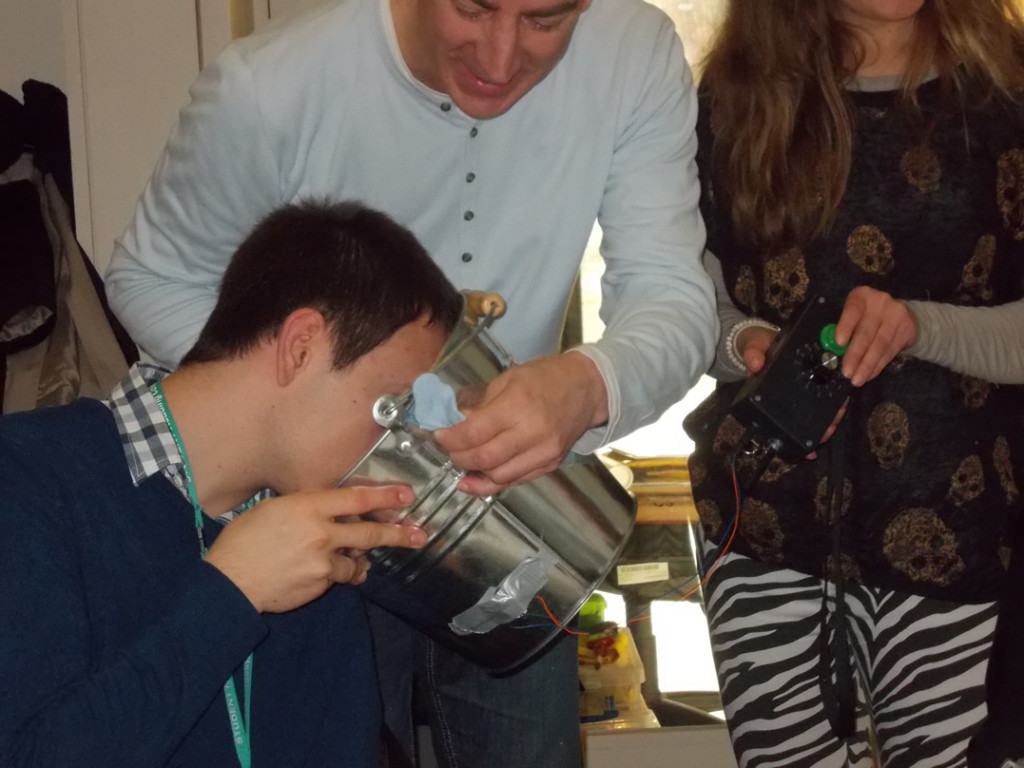 Luke listens to a sound in a bucket, and really gets stuck into the task.

Another co-researcher recalls that in the workshop last week we had a bucket that would play a sound when you placed you hand inside or near to it. However, in this case it was not connected to the microcontroller so we applied a ‘Wizard of Oz’ technique instead (i.e. we faked it). 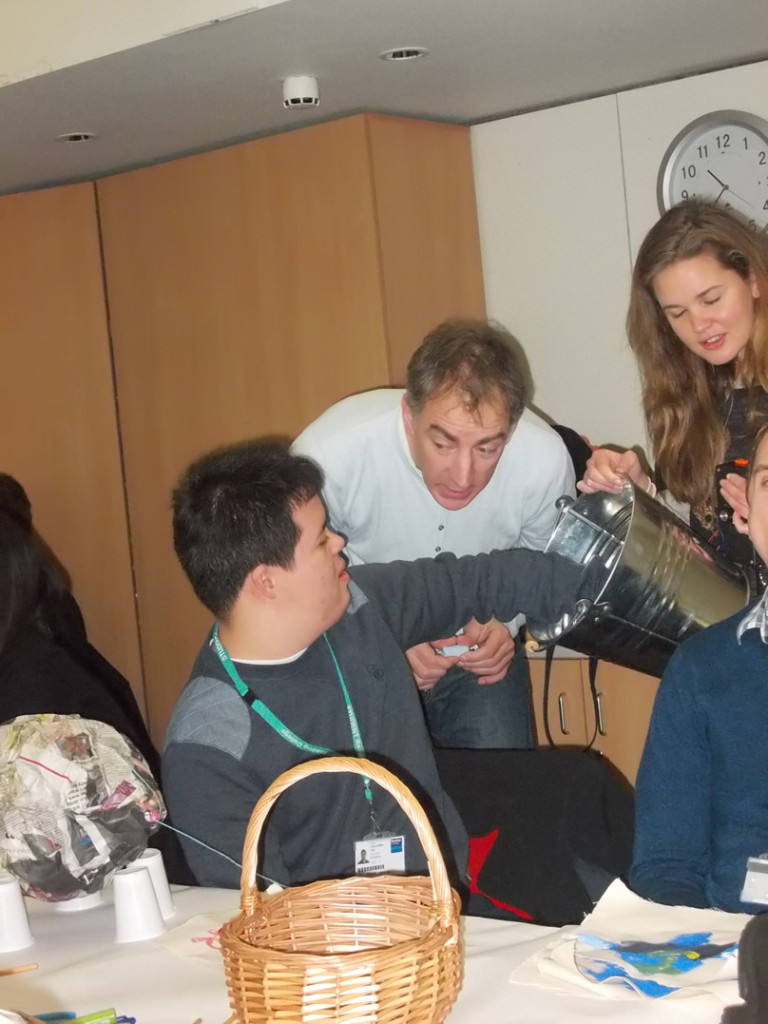 Guillermo was quick to recall that placing his hand inside the bucket (in last week’s session) would activate a sound.

Here are some photos of the artwork produced in this week’s workshop. As you can see, there are many different designs. The first shows a rather snazzy boot designed by Sian, and covered in fake cow hide, together with an acrylic painting. She has quite a clear idea of how she would like it to trigger a sound – by placing a foot inside the boot and pressing down. She will produce the sound herself during the next workshop, and this will be integrated during one of the subsequent workshops: 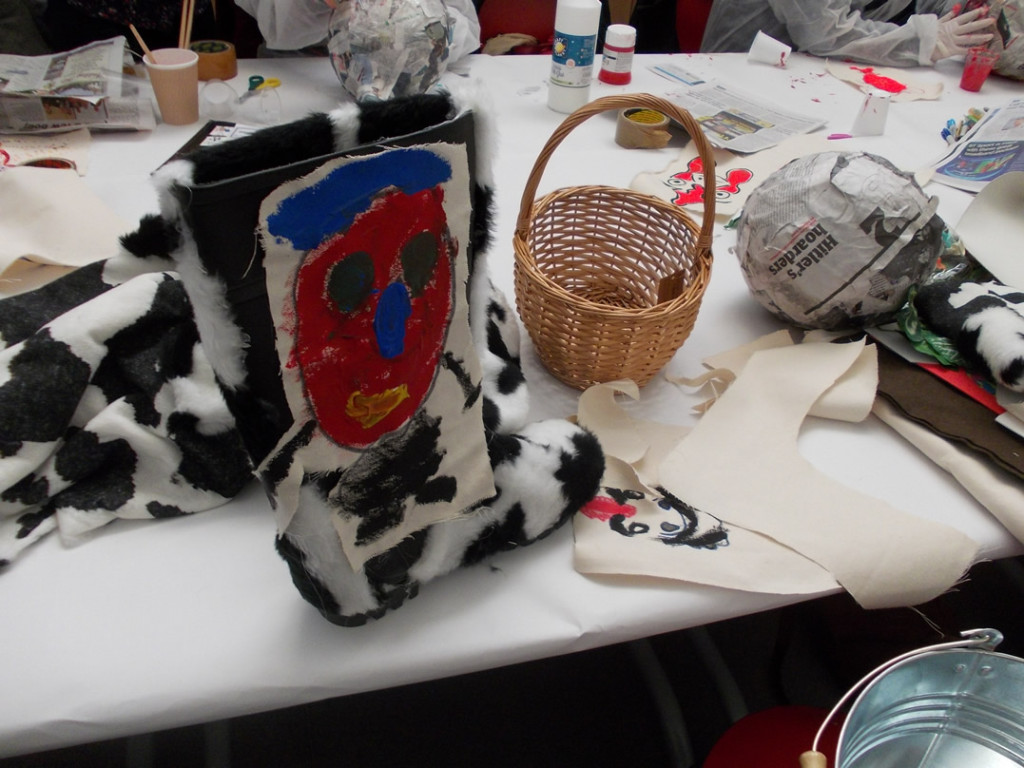 Sian’s welly, in the style of a cow

Below is a picture of Sian showing off her wonderful welly: 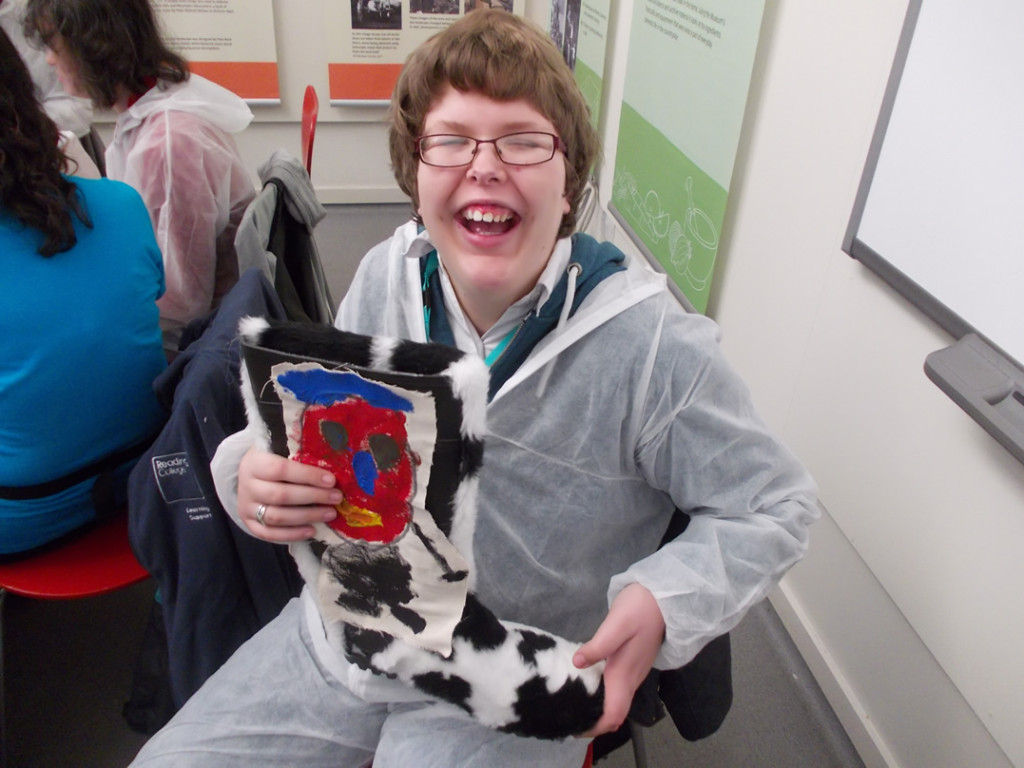 A snazzy design by Sian, which will eventually incorporate a mooing sound activated by placing a foot inside the boot!

The next two photographs show Rachel’s pig-in-a-bucket concept, which is coming along very well as you can see. The bucket is covered with bedding straw to give it a really rural look and texture. 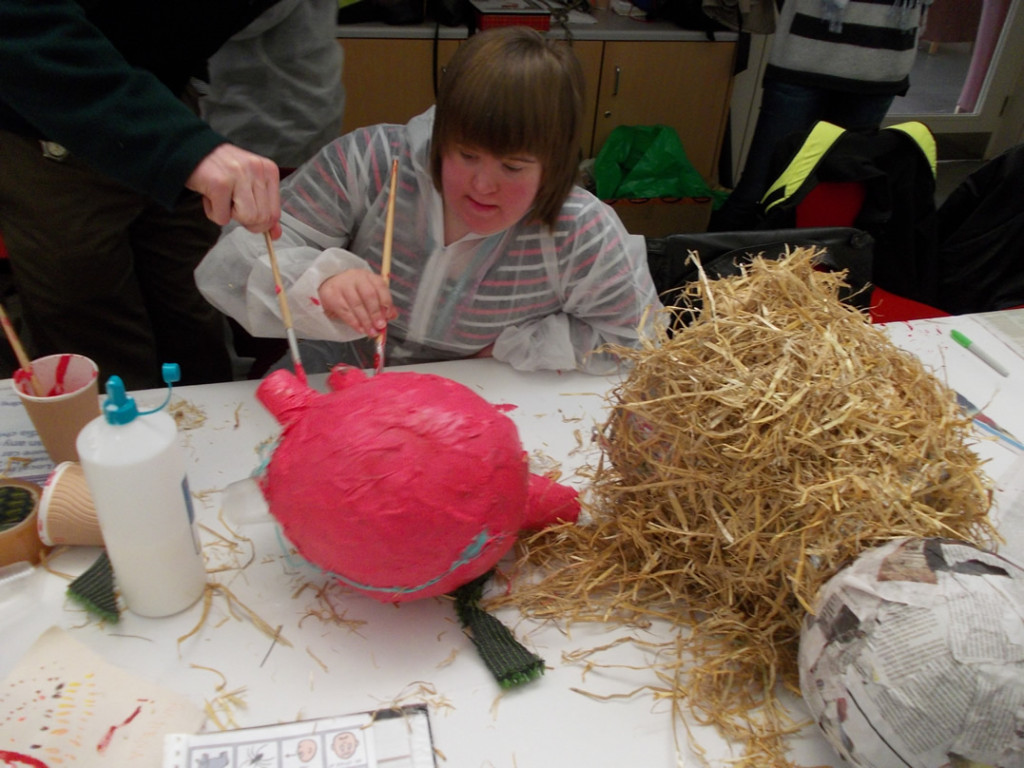 Rachel wanted to make use of the bucket to house the pig she is creating.

The pig just fits inside the bucket, with the nose protruding. Rachel has also selected a potential activation method for the sound she wants the pig to make – using a squeeze sensor in the nose. Was this a result of her exploration of audio triggers using the littleBits kit? 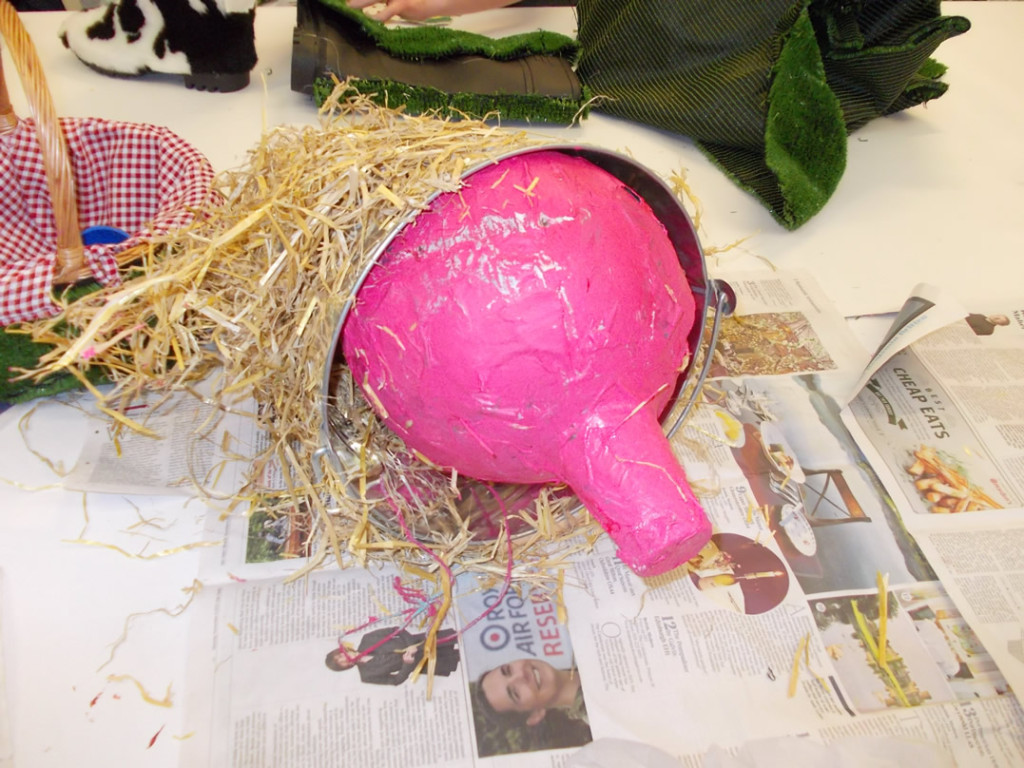 Rachel’s pig-in-a-bucket (not yet finished). It will be enhanced with a sound triggered by squeezing its nose (and possibly either some form of light or movement), but this has yet to be decided.

Rachael (the other Rachael) has also decided to construct a pig, and is also coming along very well: 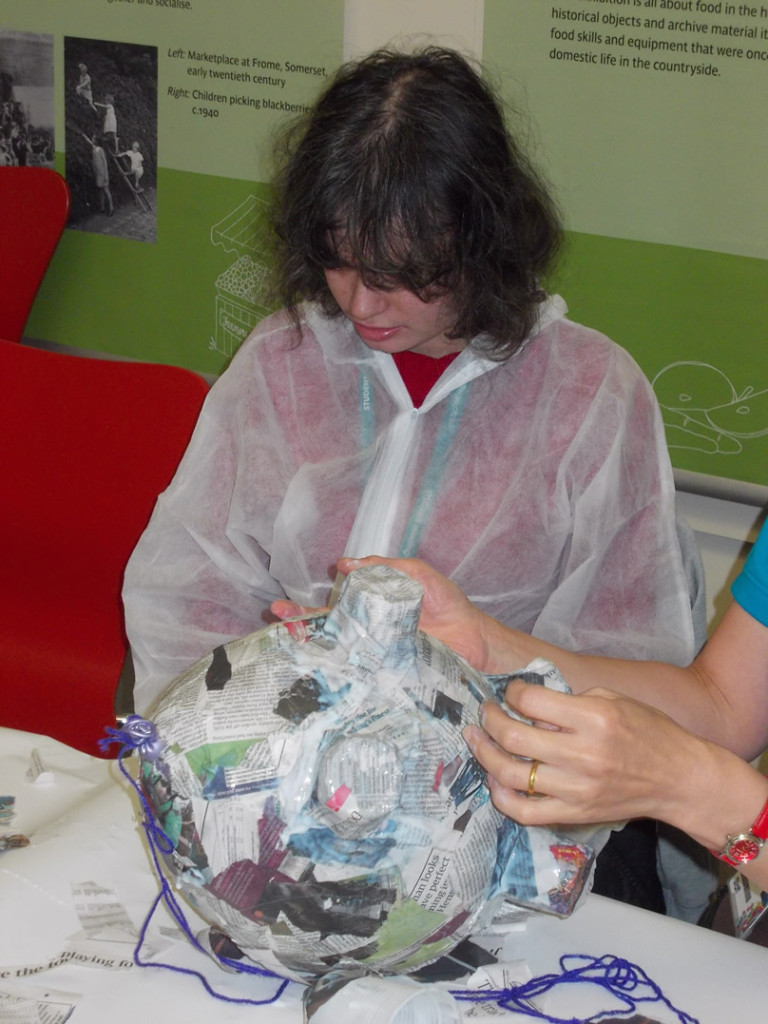 Rachael applies layers of newspaper to the balloons in the construction of her pig.

Mena is creating a chicken from her papier mache, and has painted it with some bright colours. The tail has been ingeniously constructed from straw and pipecleaners, the head will be modelled from a wooden spoon, and the comb from pieces of card, painted red: 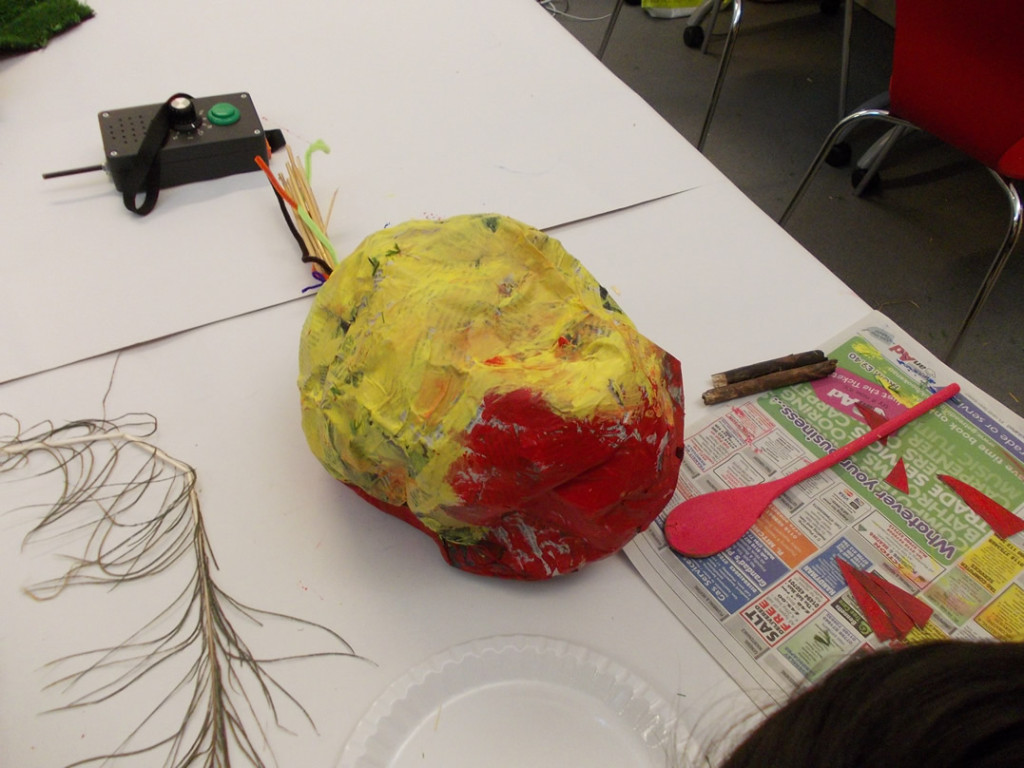 A brightly coloured chicken, with straw and pipecleaners for the tail and a wooden spoon for the head.

Luke has decorated a basket with artificial leaves and a painting he created last week of a ducks head. The contents of the basket have yet to be determined … everyone loves the duck: 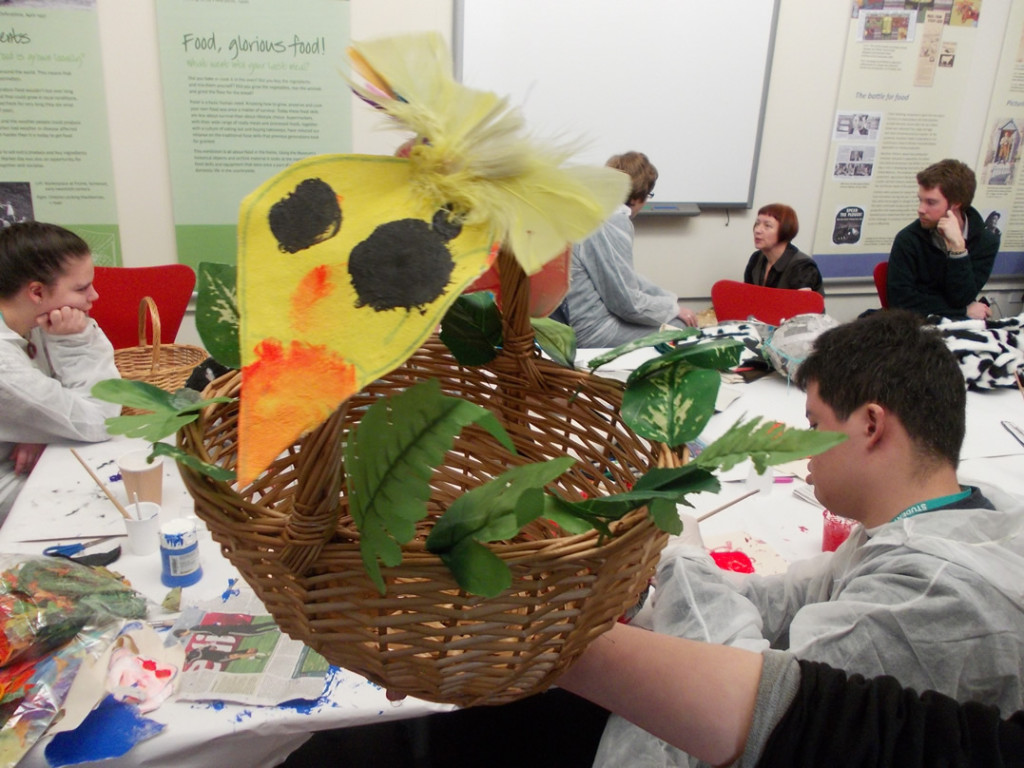 Guillermo is painting his papier mache in a bright red. Will this be pig? His artwork is always very interesting, so we wait in anticipation: 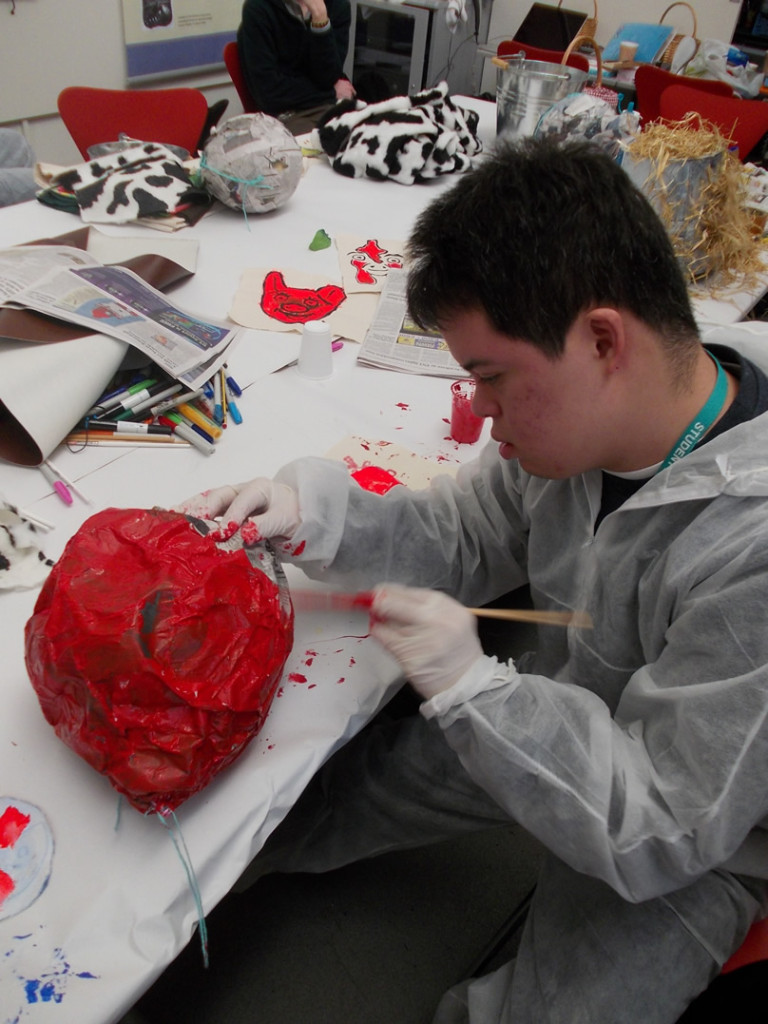 Skye has also made progress with her papier mache and has constructed the beginnings of a cow, using the artificial cow hide: 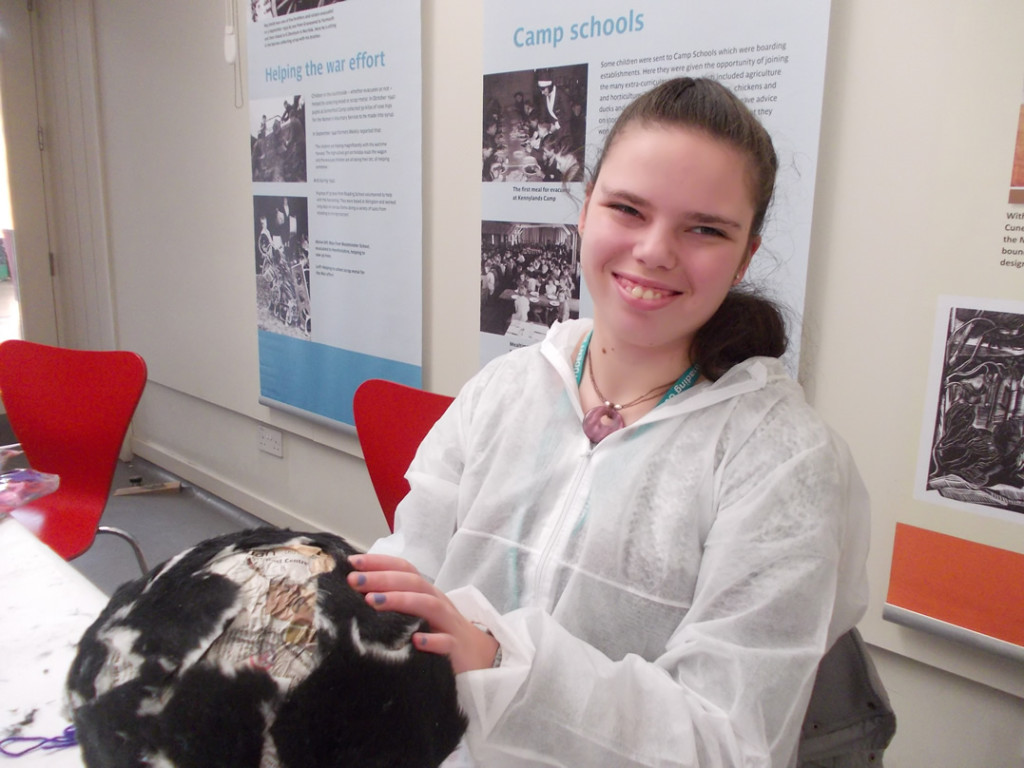